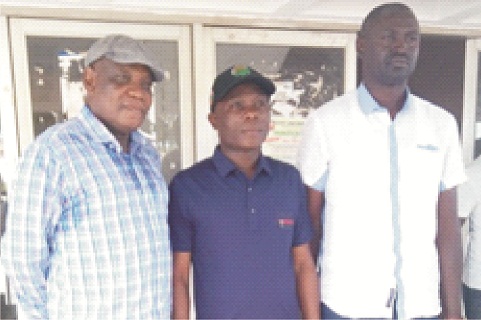 By Femi Atolagbe
|
Ondo State Government has mandated Sunshine Stars Technical Crew and management to qualify the team for continental football at the end of the new 2018/2019 football season.

Commissioner for Youth Development and Sports, Mr. Saka Yusuf Ogunleye made the call  after a new Sunshine Stars Technical Crew led by Kabir Dogo Suleiman was introduced to him.

The Commissioner said only good results could justify the huge investment the government was making on the team and meet supporters yearnings.

“We do not expect anything short of a run of good results throughout the season.

This is the only way the team can be on top of the log at end of the season.

Sunshine Stars need to rediscover the form that took them to continental football a few years ago.

Being the only team funded by government in the South West, the team has to do well.”

According to him, the team had to be reorganised for better productivity.

“The position of the team at end of last season left much to be desired.

The reorganisation that took place was a child of necessity due to the teams dismal performance in the last two seasons.

The way Sunshine Stars was performing needed drastic measures. It was populated with aged players, too many coaches and indiscipline.

The State Government then mandated Ondo State Football Agency (OSFA) to reorganise and reposition the team for better performance.

The Ministry had no input, contribution or interference in OSFA’s decision. This was done so that it will be answerable for the teams performance.

At this juncture, let me correct the erroneous impression that Sunshine Stars was disbanded.

Its far from the truth. Ondo State Government did not disband the team. No such action was taken.

A major action taken already was the elevation of talented players of the feeder team, Rising Stars to Sunshine Stars.

It is the first time in ten years that players from the Rising Stars got promoted to the main team.

Today, Sunshine Stars has 15 technical crew with 25 registered players on its payroll, as against 35 players and 25 coaching staff it had last season.

The choice of Coach Dogo Suleiman by the management is a welcome development.

He has a track record of achievements we look forward to him replicating such here.

Ogunleye assured that the government was available to support the team in it’s desire to achieve its goals.

He added that the new coach had tutored Nasarawa United for five years, during which they qualified to hoist Nigeria’s flag at continental competitions.