Ritual murders: Why Babalawos on Facebook are to be blamed 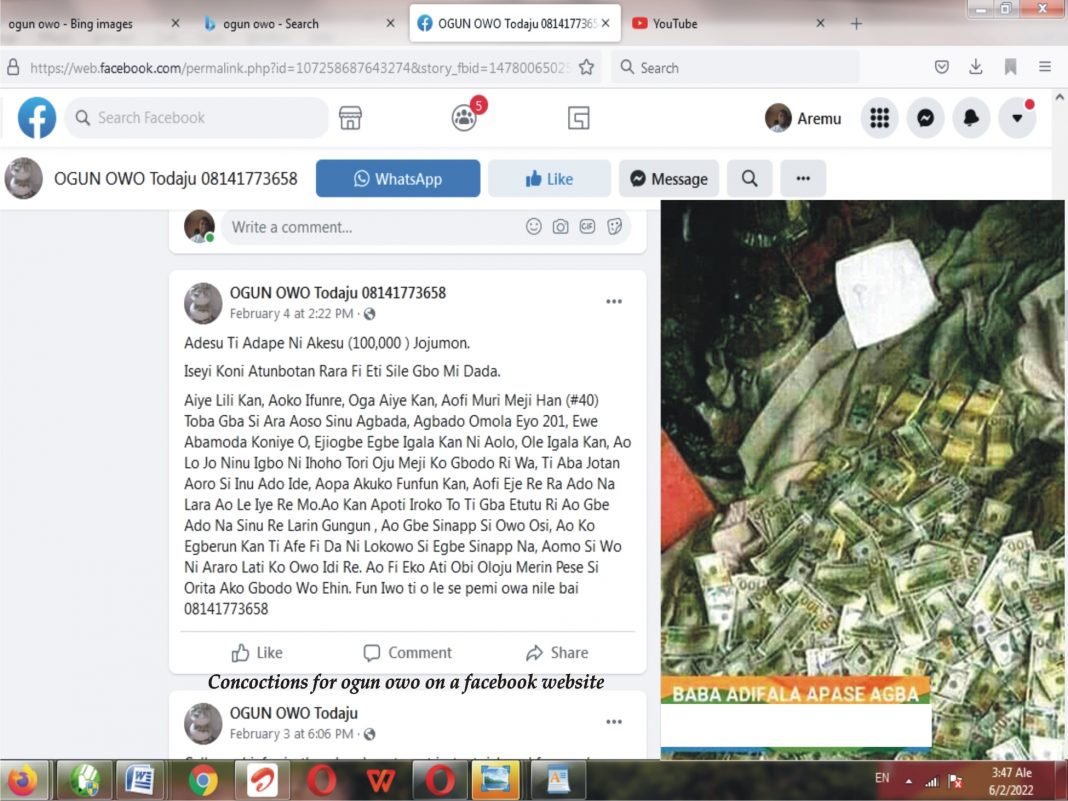 Ifakunle Awolola’s type of products include Asiri Agbara To Gbe Aye Duro (Magic to withstand the world). He is a Traditional African Orisa practitioner, a professional performing artist, father, and master chess player. Awo Ifakunle attended Hunter College, studying Community Health and Physical Education and is a student of Professor Ogunwande Abimbola, who was the Awise Agbaye (spokesman of all babalawos in the world). His Facebook page contains photographs of concoction, costumes and  esoteric messages asking people to contact him.

Ogunbowale Odedele Adeyemi, has a public Facebook group with over 5,000 members. His product is Ìwe Ogun to Daju! He has carefully hidden his biography from the internet. But there is no doubt that he is, like Ifakunle, a babalawo, because he promises the wisdom of elders on his page, while flaunting dollars as though he’s enticing people to get closer to him.

Akinwumi Iwabi has a product called Asiri Osole Ogun Owo. Strange concoctions adorn his Facebook page, and the man appears in intimidating Muslim attire. He writes in Yoruba, but the translation in English shows another esoteric language, filled with promises of wealth, health, riches, and long life. .

“ Today is 2/2/22, I and all you that have the chance to say amen to all things that are not similar in your life, the blessings of this father in the presence of God shall begin to be similar for you from today onward, all of you share this prayer in it. Seven groups will not bring them to the world,” he wrote earlier in the week.

No one would have disturbed these men, none of them asked for human beings for money making ritual,. In fact, they all said their charms forbid using human beings  for money-making rituals. However, policemen caught some teenage boys after they were seen burning the head of a girl, said to be in a relationship with one of them, for money ritual in Ogun State. One of the teenagers, Majekodunmi Soliudeen, carried out the act based on videos he found  on Facebook teaching them  how to use human  heads  for money rituals. In trying to take advantage of what he had  learned  on  Facebook, he lured the girl into an uncompleted building, killed her, boiled her in a pot. Unfortunately, spotlight falls on the owners of the videos.

Youths might be tempted to patronize someone like Ifakunle. On the home page of his Facebook website, a large photograph of dollar bills adorn it, with pictures of dollar bills falling from a traditional pot. Traditional drink for libation to the gods like aromatic schnapps lie on the pages, with a cluster of people who had come to worship whatever god the babalawo worships.  Impressionable youths could be tempted by the lavish display of dollar bills to patronize the babalawo. Telephone numbers stand across the screen through which impressionable youths could contact the native doctor.

A message, Ogun Osole Aye Atijo Todaju (Potent charm of the past that cannot fail),  hangs on the website of Akinwumi Iwabi. He says on the website that it’s the Yorubas who have charms, promising people who come to visit him to get  N500,000 within a month. He says in Yoruba, “Talo sope kosi osole tonje bi idan mo. Haaaa,osole yi je gaaan.Okere ju,wari to N500k laarin osun kan.Ti obase ise yi,ti koribe,ma da owo ise na pada.Osole yi damiloju pa.”

No one says these native doctors worked with the boy murderers, but evidence exists showing that thousands of youths act criminally based on posts on the social media. While the police interviewed the four suspects – Wariz Oladeinde, Abdulgafar Lukman, Mustekeem Balogun and Soliu Majekodunmi – talk about social media influence emerged.

According to Majekodunmi, he strangulated the murdered girl and removed her head immediately with support from other accomplices. He said: “Mustekeem said he saw a guideline for Oshole (Money rituals) on Facebook and he had a screenshot of it. Since then, he has been disturbing me that we should use Sofiat for the rituals, but I didn’t agree with him. In fact, on many occasions, I lied to Sofiat that I am not at home just to dissuade her from coming.

Consequently, they strangled the girl, cut off her head and burnt same in a local pot, purportedly for money ritual. Other people have fallen victims to crime fuelled by youths who act based on posts  on the social media. Iniobong Umoren was a young woman in her early 20s who lived in Uyo the Akwa Ibom State capital.

She shared, on Twitter, her need for a job, and one Twitter user named Uduak Akpan asked her for a private chat concerning her application. According to police reports, Mr. Akpan asked Ms. Umoren to meet her at a particular location in Uyo.

When the unsuspecting lady got there, the sinister man raped her, killed her, and buried her in a shallow grave.  Official statistics indicate that there has been an increase in the number of missing persons all over the country in recent times. Some were found, while others were not. There is speculation that majority of those who disappear perpetually without a trace were often victims of ritual killings.

Since the social media has been blamed for this trend, Nigerians want the Nigerian agency responsible for this to crack down such content on all social media platforms, as well as crack down on pastors doing miracles(because the narrative and defence of the BABALAWOS would now be that if pastors can showcase their miracles, so can BABALAWOS)

“We appreciate freedom of speech, and our basic and collective human rights, but we also should know where to draw the line. This is only the beginning and the earlier steps are taken to curb this growing menace, this dastardly acts, the better for us as a nation, and a people. Please those who are responsible for the content and violations on social media? This is the time to act.”