Ritualists on the prowl! 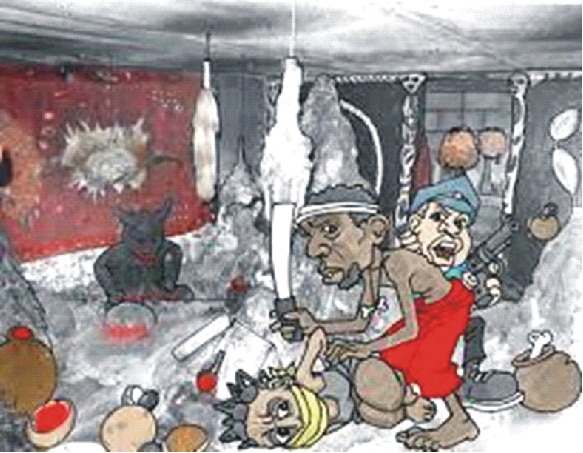 Vigilance paid off in our neighbourhood during the week as our youths caught a supposed ritualist on the prowl. Had he known what was in store for him, he would have steered clear of our neighbourhood.

Unknown to him, some youths gathered at a relaxation joint and had been observing him as he moved aimlessly up and down.

He was a young male who could not be older than 18. He wore a yellow T.shirt and a cutoff shorts. One of his eyelids had a scar.

His movement seemed suspicious to them. Although he seemed to be a bit mentally unstable but his looks as he observed the surroundings was alert.

Those watching him saw him ask a woman for some garri and she gave him. After that, he still walked slowly picking odds off the ground.

They moved towards him and he stopped in his tracks. They asked him what he was looking for which made him to be roaming the area over and over again. He had no coherent explanation in answer to their query.

By then, many people had gathered around them to know what was amiss. The boy seemed apprehensive as he looked at the curious and stern faces before him.

They took the polythene bag in his hand and pushed him to sit on the floor before they poured the contents on the floor.

They gasped in shock as they beheld the content of the bag. Different slippers; one of a pair and numbering about seven flew out along with a small doll and a dried dead cat while the garri that was given to him by the good Samaritan trader sprayed all over the contents.

On beholding the contents, the crowd went wild as the women screamed in shock. More people rushed to the scene as they wondered what the pandemonium was all about? It was around 6 p.m.

The youth descended on him with blows and kicks.

They decided that he indeed had a sinister mission to execute in the neighbourhood. Why was he picking up slippers that had been thrown away and were not even in pair?

Some of the women gathered decided that the doll was to lure innocent children and kidnap them. Some even have far-fetched conjecture that the dead and dried cat could be a kidnapped victim turned to it. The crowd grew wild with frenzied excitement.

One of the youths brought out a cutlass and smashed the side on his buttocks and he fell to the ground due to the impact.

They made him to stand upright while one of them held him by the collar and demanded “what have you come to do in our area with all these suspicious items in your bag?”

He was panting from the beating and he seemed also to be very afraid as the young men seemed on verge of lynching him.

Some of them advised that they should call the police but when they did, the police told them that they had no fuel in their vehicle.

The guy with the cutlass began to hit him on the back of his head. Lanky, he stood tall in front of the boy and held the cutlass over his head menacingly. He asked “you have come to kidnap little children? Confess now!”

Each time, he asked the question, he punctuated it with a smack of the cutlass’s side at the back of the boy’s head. His head became swollen in no time although he did not bleed.

With the fourth smack, he mumbled a “yes” and the crowd shouted again with some of the women clutching at their chest.

It did not occur to them that the young lad might have said that due to the pain of the assault or for fear of being lynched.

Some of them were already calling for petrol to set him ablaze. Some tried to grab his fingers and cut it off as a warning to him and a warning to others like him.

At last, some of the elders had demanded and prevailed on the crowd that they should take him to the police station.