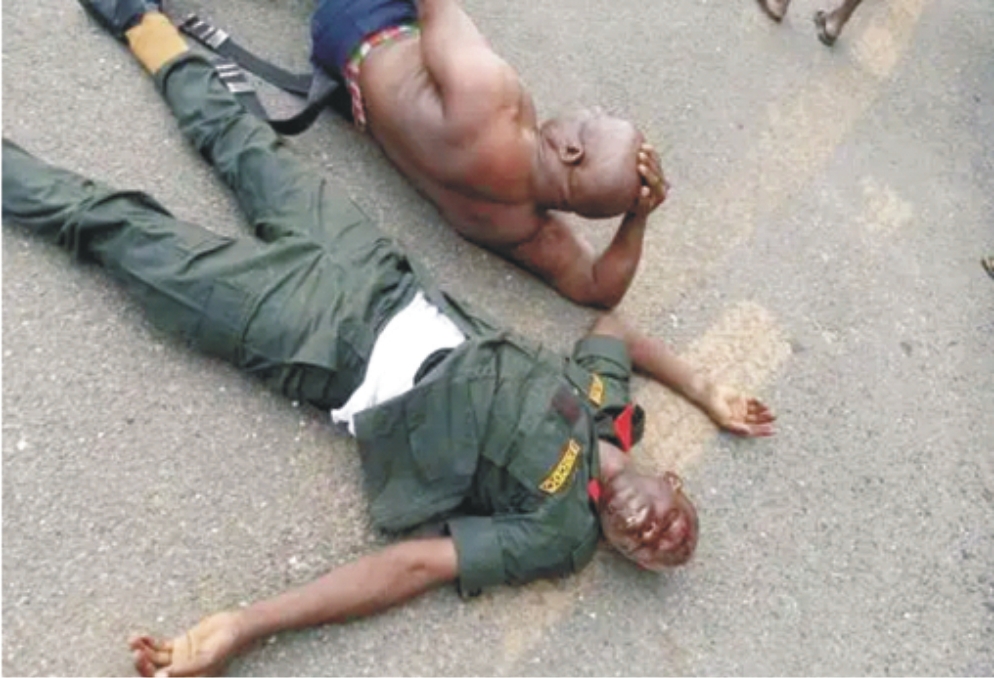 The NSCDC commandant was dragged out in his boxers and beaten severely, during which civil defenders were injured.

The show of shame happened at the Imo State Command Headquarters, located at the very busy Okigwe Road, along Works Layout in Owerri, the state capital.

It was gathered that the heavily armed men of the Squadron-18 Mobile Police, Owerri, who attacked the personnel of the NSCDC, shot sporadically in the air, forcing residents of the area to scamper for safety.

Further investigation revealed that trouble started after a heated argument had ensued between the driver of the NSCDC boss and a police officer in mufti, who blocked the exit way of the commandant’s entourage, which was returning from Abacheke, the oil bunkering site where scores were burnt to death in Egbema.

A Civil Defence officer, who gave his name only as Ikechukwu, explained that “when asked by the commandant’s security escorts to move aside, the police officer who was not on uniform vehemently refused without even disclosing his identity. He was, however, ignored on the commandant’s directive.

“However, rather than go his way, the police officer, unknown to the men of the Corps, put a call through to his colleagues, who mobilized to the command’s headquarters, while he followed the entourage to Owerri.

“On reaching the Corps office, while the commandant made to enter the command, the man blocked the NSCDC boss, brought out a pistol and announced that he was a police officer. On sighting that, he was immediately rounded up and arrested by NSCDC officers who also seized the pistol to avert danger.”

Another officer, who did not want his name in print, said, “After he was released, he returned with heavily armed enraged MOPOL men who went into beating, shooting and attacking both officers and their facilities at the premises.”

It was learnt that in the process ensuing chaos, the commandant, Mr Ogar, who was already in his office, rushed out to address the situation on hearing the gunshots, but the enraged policemen attacked and beat him up with his uniform torn, after which he was stripped down to his boxers before being whisked away.

It was also gathered that the enraged MOPOL officers who threatened to shoot at the state commandant allegedly boasted that nothing will happen.

The civil defence source who spoke to newsmen said the policemen subsequently released their colleague who was arrested and detained for invading its premises.

As at the time of filing this report, efforts to get spokespersons of both security agencies to react to the show of shame proved abortive as they did not respond to calls put across to their phone lines.