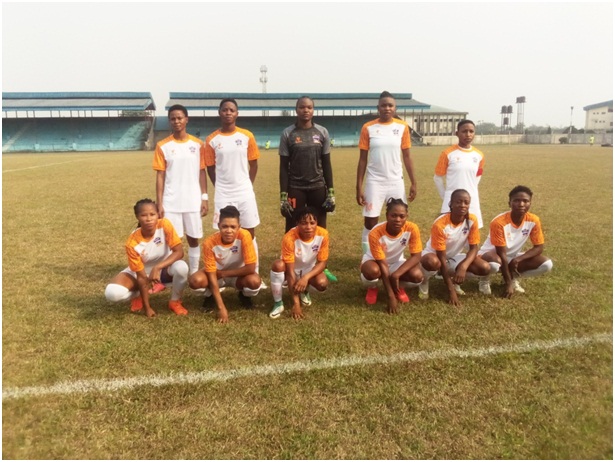 Abdulrasheed Aluko’s second half goal was not enough for Sunshine Queens FC to salvage a point against the league’s defending champions, Rivers Angels in a midweek NWFL week seven match played at UNIPORT Stadium, Portharcourt.

Sunshine Queens started the match brilliantly with beautiful team moves until the 14th minute, when Rivers Angels’ Nku Cecilia put the host ahead from a freekick.

The Akure landladies responded well with Temitope Temidayo picking out Aluko with a cross which was laid for Foluke Opeyori but the latter was denied a leveller by a last ditch defending effort in the 23rd minute.

Injury had earlier forced the Sunshine Queens to substitute Ajibade Taiwo for Abdulrasheed Aluko 11 minutes into the encounter.

Sunshine Queens’ search for equaliser before the break did not materialise as the defending champions stood firm and ensured the score board remained 1-0 to their advantage.

The visitors came out hungrier for a leveler in the second half by mounting pressure on their host, which later yielded the expected result in the 60th minute, when Aluko found the back of the net from a well delivered Aluba Ogba’s corner kick.

Before then, the Akure landladies’ acting head coach, Abimbola Oladimeji made some tactical changes with the introduction of Odunbanjo Dominance and Ikeh Ginika which, added more bite to the team’s attack.

Dominance could have drawn level for the visitors in the 15 minute from time when she was fouled in the hosts’ box but the centre referee waved away the visitors’ penalty appeal.

Temitope Temidayo blazed over from Dominance through pass in the 78minutes.

Sunshine Queens missed several goal scoring chances before the last match of the first stanza of the league came to an end with Rivers Angels grabbing all points.

The acting head coach of Sunshine Queens, Abimbola Oladimeji, in a chat with sports journalists, said his team would go back home to make adjustment where it necessary.

“We are going to use the two weeks league break to work more harder and I am very sure that we will come out more stronger for the second stanzer of the league.” Oladimeji stated.

On his part, “Rivers Angels’ coach, Edwin Okon said he cared less about how his side played, saying his target was the maximum three points which is in the kitty.

“Sunshine Queens are a strong team,. It was a difficult match no doubt. I give it to them.

“They came with a game plan but thank God we got our chances and we utilised them.” Okon submitted.