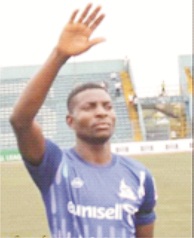 By Femi Atolagbe
|
Rivers United have placed one of its players, attacking midfielder, Kehinde Adedipe on indefinite suspension.

This was contained  in a release signed and made available to newsmen by the media officer of the  Port Harcourt based team, Sammy Wejinya.

The release states further that, “This follows his Absence Without Official Leave (AWOL).

“Adedipe’s whereabouts have remained unknown following the club’s official resumption ahead of the 2019/20 season”.

Adedipe while speaking with the Sporting Hope on the purported suspension explained  that the issue was at the beginning of the season when he  negotiated on a season loan with the team, saying till today they haven’t paid him a dime out his paper money.

He reiterated that, “I signed a season loan with them , without his consent , the secretary of  the club went to Abuja to inserted three years in his paper.

The former Sunshine Stars midfielder added that he saw the three years on his paper when he traveled with the team to Minna during the tram’s first league game adding that he immediately called the attention of the secretary to it, which he said the club’s scribe promised to rectify the error.

His words: “I sent the contract  paper to my manager which he discussed with the management of club ,with the assurance of rectifying it , which they never did.

“I told them we have to  renegotiate if they want me which they never did. They are doing this because they got the tip of my exit from the club.”