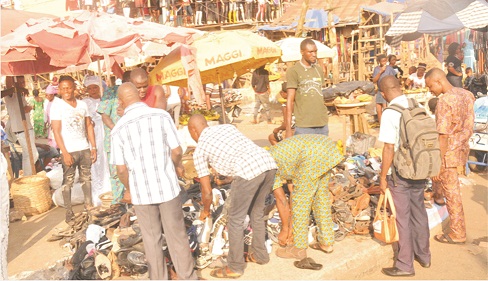 By Sunmola Olowookere
|
The activities of traders and business owners peddling their wares by the roadside  on the streets have been described as a threat to any state ‘s drive towards urban sanitization and attracting foreign investors into the state.

The Ondo State Attorney-General and Commissioner of Justice, Adekola Olawoye, stated this in an exclusive interview with The Hope Metro at  the weekend.

He made this  known, in his reaction to the  convictions of two young men, Wori Emmanuel and Ibrahim by a Chief Magistrates’ Court sitting in Oke-Eda Akure over road construction.

Olawoye, who was represented by the Permanent Secretary in the Ministry, Cyril Akinrinsola said that any state desirous of bringing in foreign investors will want to make sure that such environmental laws are complied with.

Olawoye stated that Ondo state has an existing and extant law that prohibits any form of hawking, selling of any wares on the streets or where such activities is not supposed to be carried out.

He said that the state is interested in urban sanitization and cannot afford to lag behind in the comity of states.

He added that the governor of the state, Arakunrin Rotimi Akeredolu, being a lawyer, cannot condone the laws of the state being flouted at will.

The Attorney General  said that since the law was enacted, there has been enforcement whereby people who run foul of the law were arrested, tried and convicted.

He, however, noted that the government has been lenient in the enforcement of this law, while he  expressed that when people are given a latitude over a period and they seem to be taking such for granted, then the law should be allowed to take its course.

He recalled how government agents in the urban sanitization  drove away some people involved in trading along Ilesha road during a monthly religious programme that takes place around a prayer  ground called “Koseunti”  axis.

He stated that the traders had abused the hitherto existing serenity of the road which made the government to take up the matter and restored sanity to the area.

The commissioner  who said he  is aware of  the existence of an enforcement committee put in place to review the activities of motor dealers who will not go to the appropriate place to transact their business, disclosed that government is taking stock of all these findings and promised the populace that they would soon see the government in action.

He  therefore, advised the citizens of Ondo state to be law abiding and give the government the solidarity and support that would assist it in transforming the state.