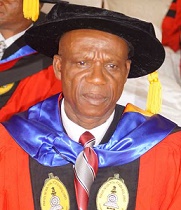 By Bukola Olamona
|
The governing council of the Rufus Giwa Polytechnic Owo yesterday confirmed the appointment of its Acting Rector, Mr Gani Ogundahunsi, amidst industrial crisis  as it laid off two union leaders.

The dismissed workers were the chairman of the Academic Staff Union of Polytechnic, RUGIPO branch, Mr Oluwadare Ijawoye and his secretary, Mr Ade Arikawe for alleged gross misconducts.

Reports from Owo, said the council has suspended the activities of the Union indefinitely.

In a statement signed by the Chairman, Governing Council, Mr Banjo Alabi also approved the appointment of Mr Atiku Sule as the Registrar and F R Aladeniyi as the Polytechnic Librarian.

Ogundahunsi, had been in acting capacity for almost a year.

The statement reads:”The Governing Council met and in line with the powers conferred on the body by the “visitor” to the Polytechnic, Arakunrin Oluwarotimi Akeredolu, the laws of Ondo State and the Polytechnic handbook, hereby unanimously approve the appointments of the Principal Officers.

He congratulated the  principal officers and wished them a successful tenure of office”.

The statement also said that stakeholders must know that  “The appointment of principal officers of the Polytechnic is not a chieftaincy affair, whereby only a particular lineage could aspire to.

” The Polytechnic is not a jungle where some war lords will appoint and sustain one of their own through thuggery, intimidation and blackmail as we are witnessing now. It is not a political contest, whereby the most popular candidate will emerge.

“The positions of Owo Poly Principal Officers are positions created by law and are guided by the laws of Ondo state and the Polytechnic’s handbook.

“These positions are open to all citizens of Ondo state, All citizens of Nigeria and indeed members of the international community (under some special circumstances) and the only basis for discrimination are as follows: intellectual capability of candidates and ability to drive change and attract funds/development to the school.

“Ability to fulfil the motto of the school- (Advancement through technology) and to turn the school to one huge manufacturing company- where our students are well equipped as entrepreneurs, employers of labour and not job seekers upon graduation , as it is the case of other schools of technology around the world”.

Other conditions, according to him included “ability to be value driven, creation, production of value and products to enhance human development and  ability to display verifiable power of influence and international connections to turn our school into something similar to Silicon Valley, he stated.