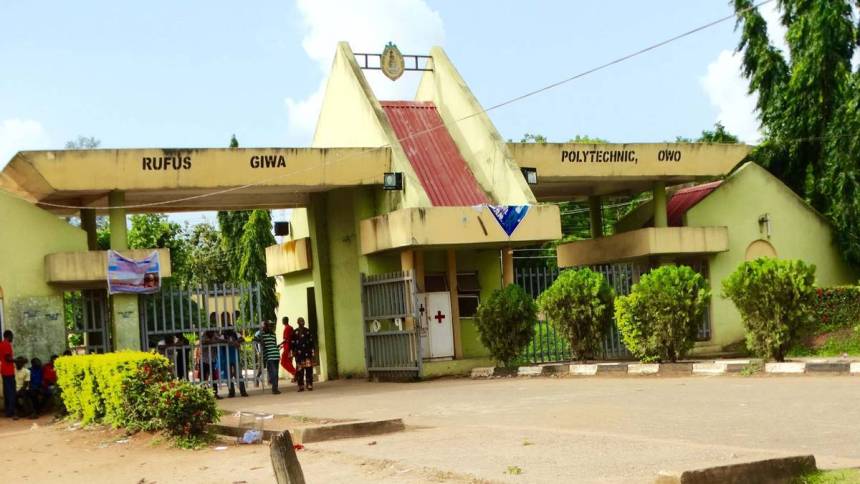 From Agboola  Fesobi, Owo
|
The Management of Rufus Giwa Polytechnic Owo, (RUGIPO),has inaugurated members of the committees on Due Process  Procurement and Existing Equipment to further enhance the development of physical and infrastructural facilities in the institution .

Speaking during the inauguration of members of the two committees, the Acting Rector of the Polytechnic, Mr Gani Ogundahunsi said both committees would serve as spring boards to propel the institution to the next level.

He explained that the Committee on Due Process and Procurement was constituted to ensure proper monitoring and judicious usage of the Five Hundred Million Naira (N500,000,000) intervention fund disbursed to the school so as to achieve better result.

He however noted that the committee on existing equipment is to appraise all the institutional equipment and machines to ensure their proper usage for the advantage of the school.

While inaugurating the 7-man Committee on Due Process and Procurement, the Ag. Rector thanked the Governor of Ondo State, Arakunrin Oluwarotimi Akeredolu (SAN) for releasing the intervention fund for the development of the school.

He noted that the last time the school accessed capital grant was in 2012, hence the need for the committee to ensure that the fund is prudently utilized.

Mr Foluso Alabi was appointed as the Chairman of the committee. Other members are Mr Olumuyiwa Alabi, Mr Abiodun Fadero, Mr Martin’s Popoola, Engr. Moses Abodunrin and Mrs E. Olaoye-Apelona while Mr Bayo Elebuteto was also appointed to serve as the Secretary.

The committee is saddled with the responsibility of ensuring that all procurement pass through due process before they are recommended to the management for approval.

In the same vein, Ogundahunsi also inaugurated the Committee on Existing RUGIPO Equipment. The 5-man committee which has Mr Smart Konyeha as the Chairman also has Mr Benson Ogunbode, Mr Austin Olowoyo, Mr Abiodun Akinwonmi as members while Mr Ebenezer Oguntuwase was also appointed to serve as Secretary.

The committee is charged with the responsibility of visiting all departments ,workshops, and laboratories  to locate and ascertain all functional and non-functional equipment and machines and recommend how they could be best utilized.

Ogundahunsi stated that, “To make efficient use of the resources, there is the need to carry out some radical changes that will ensure best usage of the equipment and machines that had not been put to use in the institution”.

He expressed absolute confidence in the ability and integrity of members of both committees to deliver on their mandates,

While urging them to perform exceedingly well, he implored them to do a thorough job.