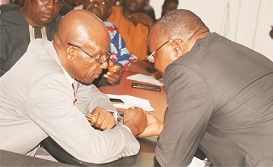 By Bukola Olamona
|
The newly elected officials of the Student Union  Part Time Association of the Rufus Giwa Polytechnic, Owo (RUGIPO) have been sworn in.

Others that were sworn in at the event held at the Adekunle Ajasin Auditorium of the institution  are officials of the Student Representatives Council and Hall Residence officials.

The Acting Rector, Mr Gani Ogundahunsi who swore them in charged them to collaborate  with the management to be able to sustain the existing peace in the institution.

While congratulating the new leaders, Ogundahunsi advised them to be magnanimous in victory by accommodating their co-contestant in the scheme of things.

He cautioned that being a Student Union leader does not confer on them the right to indulge in unbecoming acts, and therefore advised them not to jettison the primary reasons for which they were in school.

He further advised them to start building  their future, saying ” there is no future than the one you are creating now”.

The Rector also assured them of the management’s support adding that attention will be paid to all matters relating to their welfare.

He used the occasion to appreciate the visitor to the institution and the Governor of Ondo state, Arakunrin Oluwarotimi Akeredolu for his support.

Earlier, the Dean of Student Affairs, Mr Henry Olu-Braimoh thanked the management for providing enabling environment for the success of the SUG election using e-voting method which he described as first of its kind in the history of the institution and had been adjudged as credible, free, fair and transparent.

He also disclosed that funds has been released for the renovation of the SUG Building .

In his inaugural speech, the SUG President, Godwin Ebiniyi Godwin  thanked everyone for the opportunity given him to serve.