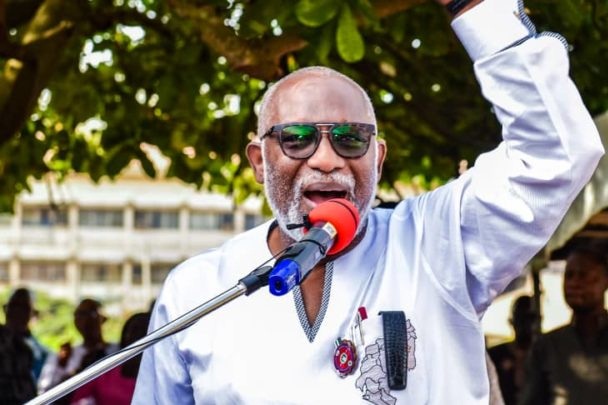 By Chris Chimezie
|
Ondo State Governor, Arakunrin Oluwarotimi Akeredolu, has commended the Governing Council and Management of the Rufus Giwa Polytechnic, Owo (RUGIPO) for proactively actualising the policy thrust of his administration for the institution.

Governor Akeredolu who spoke during a visit to the institution said he was happy that the efforts at repositioning the institution to enable it contribute maximally to national growth and development have started yielding fruits under the current management.

The governor who promised better attention to infrastructural uplift of the institution hoped to unveil several projects which his administration has approved funds for their execution.

Conducting Government House Correspondents  round  sites of the ongoing projects, its Acting Rector, Gani Ogundahunsi commended    Akeredolu for approving funds for the completion of  projects in the institution.

Projects inspected included the Faculty of Agricultural Technology Complex, Agricultural Machines Fabrication Centre and Store where feedmills machines would be fabricated and animal feeds produced, a Triple Information Communication Technology (ICT) Complex with an administrative block that would serve as the nerve centre for the interconnected buildings.

Others are the Rectory, Bursary and Registry buildings.

He explained that the entire ICT Complex was inherited projects at 30 percent completion, but had now moved to over 70 percent.

“I can assure you that in the next eight  weeks, it will be completed. All the materials to complete the job are on ground.

According to the rector, ICT complex has three halls and an administrative block. Each hall is capable of accommodating 660 students, totalling 1,960 for the three halls.

“We are in the computer era. We are thinking of conducting our examinations by computer based tests. It will also serve as a very big IGR base for us.

“We have been conducting JAMB exams, but making it larger, people will be coming from far and near to write and pay us good money.

Ogundahunsi further said a nation that could not feed itself was in crisis, hence the need for people that would actually go into production, which the school is training.

According to him, there is a building to fabricate  feedmill macines, while we also have a hatchery, so we don’t need to buy fingerlings from outside.

He further said the three buildings; Rectory, Bursary and the Registry were left  uncompleted since 2014, but Akeredolu had recently granted some capital votes.

The Acting Rector assured that in few months, Governor Akeredolu would be invited to commission the projects for the comfort of both the staff members and students of the polytechnic.

We ’ll be fair to all teams – Referee Council Chair