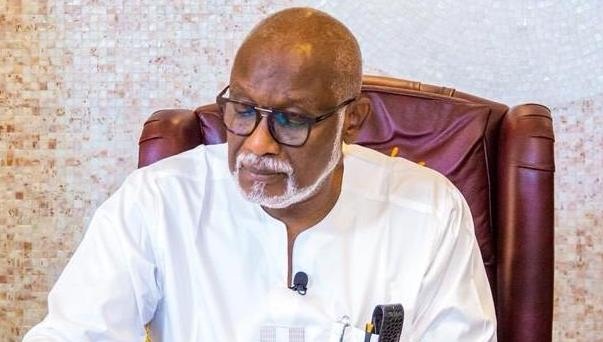 Ondo State Governor, Arakunrin Oluwarotimi Akeredolu, has expressed concern over the inability of the Local Government to pay its workforce, stressing that the local government is in dire need of intervention.

The Governor spoke on Tuesday while playing host to leadership of the organised labour in the state who were in his office on a “Thank You” visit.

“For us at the State level, we were able to overtake them because few money came in and I said these monies have to be used for workers’ salaries. Not that we have stopped working. We are still working.”

Earlier the Chairman of the Nigeria Labour Congress, Comrade Oluwole Sunday-Adeleye said the organised Labour has come to thank the Governor .

“We have come to say a very big thank you sir. If we are saying we don’t know the inflow of money into government and percentage salary is taken out of it, we’ll be deceiving ourselves.

“We are not unaware, of course, civil servants are signatories to the account, not even head of service, whose one leg is with us and the other one is with the government. We are aware that almost 80 percent of what comes in goes to salary which we normally term recurrent expenditure.

“Ordinarily, there is no way recurrent expenditure should be more than capital expenditure but because of your policy and determination to see that you do not owe workers, you even paid the ones you inherited. That is why, today, we are enjoying this leverage.

“You paid three salaries within ten days. October, leave bonus and November salary. And luckily, my joy is that leave bonus is not taxed and we don’t put mortgage on it. We don’t use leave bonus as a collateral.

“You have said it severally sir, that you have not given us a dime personally, whether to bribe or do anything. But we have also looked at it that if government is committing larger percentage of its income into salary, then we cannot ask for anything better than that.

“We can only pray for that sustainance  sir, because it got to a stage I was even afraid looking at what you do and wondering where you would get the money to finish the project within the next 50 months.

“Mr Governor sir, if we would not be asking for too much, you would agree with me that we have about five services in Ondo state that the head of service is superintending over. We have the Civil Service, TESCOM (Teachers in Secondary Schools), Local Government Service, SUBEB, Judicial Service and Assembly Service, which to some extent, is the part of Civil Service as at now

“And we are not unaware that the state FAAC receipts cover the state Civil Service, TESCOM, Judiciary and Assembly, while the JAAC covers Local Government Service, SUBEB and their respective pensioners.

“It is on record that since you came on board, you have never touched local government money. Not that they told us but because we know. As God would have it, two of us here are representing labour on the committee of JAAC. That is the NULGE President and the NUT Chairman, and they always came back to give us report.

“As at today, only few will understand that our source of salary is different. People believe salary is salary. It is a big request to help us see into the local government arrears. They are the closest to the grassroots”, he said.