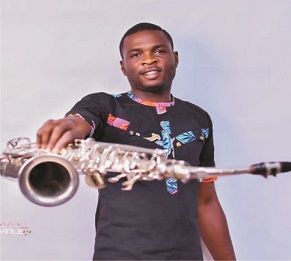 A well known Nigeria saxophonist, Emmanuel Kayode Farinloye, popularly known as Kay Sax, has said that he had been  engrossed with   saxophone since  he was young and have full support of his parents which made his dream come to reality.

The artiste during an interview with Friday Extravaganza said that he got the inspiration while he was in school and he keyed into it since then.

According to him, he learnt saxophone from his Late teacher, Mr Joel Ajayi and went on to develop it. He  said that  he could not call it a career then and  added that his chosen career has paved way for him.

Kay Sax who hails from Ilesa in Osun State said that he  dabbled  into saxophone due to the love and passion he had for it, added that he can play for hours non stop.

The artiste who has been playing professionally for over 20 years said that he had tremendous results and acute achievements in the field.

“I came across the instrument in the year 1996 when someone brought it to my church for special service and played it wonderfully. So I got inspired and fell in love with it and I decided to get mine and start learning.

“When I started playing saxophone, it was birth out of inspiration. I was just engrossed with  it.  Though I could not play it then.

“The day I found my reason to be a saxophonist, that day it shifted to be my career”.

“It became a career when I discovered that I could do it for free. I see it as my power, my voice, my recognition and Secret”.

“I am credited at Jazz music and I had tremendous results and acute achievements in this field while I still do well in classical and contemporaries music”.

According to him it is important to clear the audience that “my career is not my children’s career.

“My children are at liberty to choose independently as God will lead them. Notwithstanding, I will train them in music generally and guide them to remain excellent and faithful to God in their careers.

“Should we see anyone among them who will choose music as a career, I will give equal attention as to the profession of others” he explained.

The artiste counted his challenges. He  noted that saying it does not change his career or focus, that it only enlarges his capacity.

Kay Sax  who mentioned some of his mentor to include Gerald and Mike Aremu noted that they are good and reliable to emulate in the industry.

He noted that his aim in the industry is to become a great and well known saxophonist that will create a room for young artistes to learn about saxophone, have BTL music school, 120 Trumpeters annual Musical workshop (entrepreneur) platform and also to have Emvic Real Estate.

He stated that he has been able to visit  12 States and two countries since when he has been into this business.

Kay Sax urged all upcoming artiste to remain focused and rehearse always added that rehearsal is the key to success.