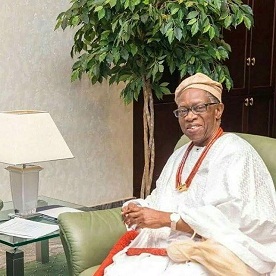 From Jimoh Ahmed, Owo
|
All is set for the eligible screening of Princes who are itching to become the next Olowo of Owo.

Already, 18 Princes all from the Elewokun dynasty have been penciled down for the screening exercise expected to commence any moment from now.

The President of the Senior Omolowos, the body empowered to select a new Olowo and the Ojomuluda of Ijebu Owo, Oba Kofoworola Oladoyinbo Ojomo confirmed to The Hope that the screening will begin shortly.

The Oba who spoke with journalists after a meeting of the Senior Omolowos with Owo local government officials said the screening will last for five days.

He promised to carry the media along and pledged that the exercise will be fair, transparent and equitable.

Oba Ojomo appealed to the people to help the Omolowos make the selection process devoid of rancour and ill feelings as the town cannot progress in the midst of strife.

The Hope learnt that the meeting convened by the senior Omolowos was at the instance of the local government administration through a letter dated June 14, 2019.

Meanwhile, Chief Yomi Ode, The Ajogbo of Owo and also a Senior Omolowo, in a document tagged Motion for Adjournment of the Meeting to Nominate Aspirants To The Stool of The Olowo of Owo referred to a letter from the Director of Local Government Administration of Owo local government and with reference number OWLG/5042/11/191, dated June 14, 2019 which requested the President of the Senior Omolowos to convene a meeting of the body to call for nomination of candidates.

Ode disclosed that consequent upon this, the meeting was scheduled for Monday, the 24th day of June, 2019 while the Secretary of the body nominated 18 candidates to contest for the stool.

In another document, titled Motion To Nominate The Eighteen Applicants Aspiring To Occupy The Vacant Stool of Olowo of Owo, the secretary of the Senior Omolowos, Chief Akinmade Akinwumi, the Usikaye of Owo moved the motion to nominate the 18 candidates being direct sons, grandsons and great grandsons of Elewokun Dynasty.

The throne of Olowo became vacant following the demise of Oba Folagbade Olateru Olagbegi III who joined his ancestors on Tuesday, April 16, this year.