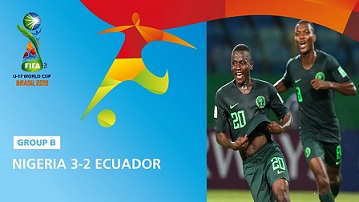 There is really nothing wrong in losing matches, especially in cadet tournaments. It is the flip side of winning. When you beat other teams, the taste of victory in your mouth is the taste of defeat in their mouths. But when the defeat is as a result of your own making, something is really wrong. This is the problem with the ouster of the Golden Eaglets from the ongoing 2019 Under-17 World Cup in Brazil.

The Nigeria Football Federation has fired the team’s coach, Manu Garba in a bid to make him the fall guy for the misadventure in Brazil. Garba was reportedly sacked for not using the players that defeated Hungary and Ecuador in the opening two matches against his wards’ conquerors, the Netherlands in the Round of 16. As if on cue, allegations of corruption started flying against the embattled coach in the media immediately his sack was made public.

One allegation said 80% of the boys that Garba selected for the tournament were over-aged and that all the players paid their way into the team, with each player coughing a minimum of US$10,000 (approximately N3.6 million). Another reduced it to a nepotistic attack that he did not pick talent from Gombe or northeast Nigeria because players from that axis did not have money to pay. Outlandish as these allegations sound, nothing is really beyond the ruinous capacity of those who feed fat on the Nigerian game.

However, a more plausible factor is the allegation that certain entrenched interests imposed some players on the team. Shortly before the tournament kicked off in Brazil, the media reported that a son of one of the country’s security chiefs was imposed on the team in an apparent bid to scuttle the prosecution of some NFF bigwigs arraigned in court on corruption charges. Quite suspiciously, the NFF President, Amaju Pinnick and his co-accused, who had not attended court all this while, suddenly showed up in court. The court promptly discharged them upon the withdrawal of the charges against them by the prosecution.

Of equal concern is the absolutely riling report that the NFF failed to make money available to the team. This report goes beyond mere allegation as it comes directly from the Sports Minister, Sunday Dare. The Minister tweeted publicly that “Nigeria’s performance at the Under-17 World Cup calls for a review. Indeed, our football administration at all levels calls for a review. We must exact greater responsibility from those charged with our football administration. Timely payment of salaries and allowances vital.”

Despite this public assertion, the NFF has not reacted. Instead, the players were sent home empty handed after their arrival from Brazil. Journalists were surprised that the NFF did not give the players money in Brazil despite the fact that the Sports Ministry provided enough funds to clear their bonuses and allowances up to the final. One source told a news reporter, “The ministry gave the NFF money for the competition; the minister personally facilitated the provision of the funds so that the kids would be comfortable during the competition but many of us were shocked when the NFF failed to give them money and told the players they would reach out to them later.” How our soccer lords expected the team to do well without money amazes me.

The refusal of the NFF to pay our flagbearers in international competitions has become a recurring decimal in recent times, not least under the Pinnick administration. At the 2019 Triennial Conference of the Sports Writers Association of Nigeria, SWAN in Port Harcourt in September, a former Sports Minister, Tammy Danagogo regaled the conference with unbelievable stories of downright sabotage of the Super Eagles at the 2014 World Cup by the NFF which deliberately withheld payment to the team despite having received all the monies required from the Sports Ministry before landing in Brazil. The same NFF descended on the coach, the incomparable Stephen Keshi as the one who failed Nigeria in the competition despite the great man matching the team’s best performance ever – a second round narrow loss.

It is good that the new Sports Minister is already aware of the shenanigans that go on in the NFF. He must go beyond tweeting for a total review of the federation’s administration at all levels and initiate it with despatch. Is it not curious that the Under-23 team is gasping for breath in the African championships ongoing in Egypt after news reports that the team is also being suffocated of funds? It is abnormal that those who should ensure that things are done in the right way would be the ones to subvert the system for selfish motives. Danagogo said as much as that; Dare is echoing him. But he also said something else, that it was the media that halted his move to sanitize the system.

Have the media not started in that direction with the seemingly coordinated attack on Dare following his removal of Sunday Adeleye, the Technical Director of the Athletics Federation of Nigeria (AFN) for the poor performance of Team Nigeria at the IAAF World Athletics Championships in Doha, Qatar? Dare should dare the NFF and their media collaborators and organize a sweeping overhaul of our football setup. This is the way to go.