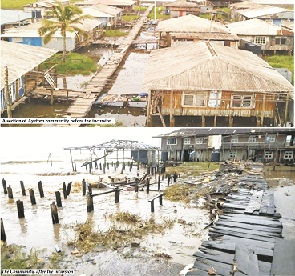 By Saheed Ibrahim
|
Properties worth over N200 billion have been lost to the Sea incursion which threatens to wipe out Ayetoro community in the Ilaje local government area of Ondo State, The Hope has learnt.

The last sea incursion, according to the community members, occurred midnight September 24, 2019  around 3 a.m.

Describing the situation , the Secretary General of the community and a member of Ogeloyinbo-in-Council, Otunba Dele Kudehinbu said over 200 buildings had been swept away by the sea while many families have been displaced.

Kudehinbu said apart from the residential buildings lost, the community’s football field and another land mass of about 500 meters before the sea had also been lost.

Besides, the community’s secondary and primary schools, the health certre among other institutions had also been wiped out.

The Baba Ijo of the Holy Apostle Church, Archbishop Eremibo Eretan stated that although no life was lost, property worth over N200 billion were destroyed.

He revealed that many businesses had been destroyed and the economy of the community had been totally paralysed by the incident.

The Chairman, Board of Registered Trustees of the Holy Apostle Church and a member of Ogeloyinbo-in-Council,  Apostle Jeseri Iwasanmi Ajijo disclosed that the sea had ravaged the whole community and half of it had gone under the water.

He disclosed that the federal government, through the Niger Delta Development Commission (NDDC), had awarded a contract to two firms but nothing had been done

Apostle Ajijo revealed that the community and the people had tried to help those that were hugely affected by the sea incursion but the solution to the problem is beyond what the community could afford.

He disclosed that the community had sent many representatives to the government to tell them about the degree of the damage that the sea incursion has caused in the community but nothing had been done so far to save the community.

“This is above the community. It is a matter of Federal Government or international organisations to intervene because it is very serious and beyond the community”, he said.

The youth leader in the community, Mr Iretolu Ajinde disclosed that the sea incursion usually occurred four to five times every year and when it happens, property and buildings are usually lost at every incident.

According to him, the initial sea shore was more than 500metres away from the current position but the sea had continued to erode the community.

Mr Ajinde disclosed that the first palace, which was built with bricks, had been destroyed by continuous sea incursions on their land.

He appealed to the state and federal government to help the people of the community and bring an end to their horrific tales.

He also testified that the major cause of the constant sea incursion was due to the oil exploration constantly going on the sea.

Some of the indigenes of the community also spoke with The Hope and recounted their losses.

Mr Obapolo Lawson, whose house is closer to the sea shore, told The Hope that the sea came suddenly at midnight, around 3 a.m. and hit his house.