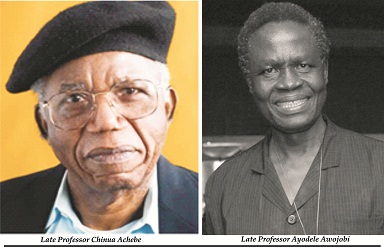 By Theo Adebowale
|
An electronic company is called Life is Good.  Each time I look at issues of life, challenges and accomplishments, frustrations and celebrations; confusion and conclusion, they get confusing the more.  We were at Catholic Hospital Oloyoro to visit a relation on admission.  Another patient in the ward, as young as our patient, packed up.  Her mother went berserk.  She was crying, shouting hysterically.  As skilled as Yoruba counselors around tried to calm her down, they failed.  This bereaved mother was ushered out of the hospital and even on the street of Ibadan she could not be restrained.  She jumped on the highway and as she landed, it was in front of a taxi she found herself.  The driver managed to screech it to a halt.  That did it.  She became calm and restrained. Quietly, she followed her people home, no more sobbing, no more suicide attempt.  Life is Good.  A fact of life is that people continue to die.  We attend funerals; we condole with the bereaved and sometime might even cry more than the bereaved.

For a long time we are not bereaved.  Then as we advance in age, death strikes.  When my father died, I was surprised that death could be so daring, my own father, it was embarrassing.  Then years later, some two decades, some day, my mother, my gold of inestimable value, passed on.  It was to me unthinkable, scandalous that death would come confidently into my premises and cart away my mother.  In this helpless situation, the reality dawned on me.  Then my personal persons, so early enough was Kayode Elegbe, childhood friend and comrade in pranks.  He went down.  Or is it WB Adeleke?  Several of them.  And in Yoruba, it is a truism that when death knock down your peer, it is communicating with you in proverbs.  Two weeks ago, another childhood friend, Gbenga Oguntimehin of Adeyemi College of Education, Ondo passed on.  Given my poor state of health, I believe it is time to discuss the unbecoming notorious activities of death.

June 2018 my big sister, eldest child of my parents died.  God gave her unto us, when it pleased Him, death took her away.  A devout Christian, subscriber to CAC style of piety.  No earrings, no pendants.  March 2019, my kid sister Yemisi was harvested by death.  Death poaching my vineyard.  If people that are more careful with issues of life including recreation are now easy target of death, what is the chance of the careless? Or shall we say, what is the life expectancy of those that are not as close to God, and dabble into issues of hazardous nature.  Lois, my big sister expected a Christian to steer clear of Nigerian politicians.  She believed they are so deadly a good Christian must avoid joining issues with them, and she avoided them until she breathed her last.  Gbenga a lady’s man paid meticulous attention to issues of health and safety and yet, Death would not leave him alone.  Why is death so callous, so cheap, so ubiquitous?  Operating ever so indiscriminately, why is there none to call it to order?  In my own case, why is it patronising my territory?  Within a space of 10 months it has taken away two sisters of mine, my uncle and two cousins.  Why my own people?  Why does death spare so many that are ripe in age, over a hundred years, to snatch the youth?  Why has Death no respect for anybody?  Why does it spare criminals to attack law abiding citizens?

The other day we were at the Police Station, Akure, a young man whose father just died in an auto accident came to ask me, pointing to an old man sympathizer, why should Death leave that man to take away his own father?  I hope we could apprehend Death and constitute a panel of intelligent people to grill it on how it continues to shatter joy, disrupt homes and plans, turn people to widows and widowers, orphans and childless without a thought for consequences of its actions.  Can we not try death along with its collaborators like accident, disease, sicknesses and carelessness to make them pay for their dastardly acts?

As christians, we know that Jesus swallowed death in victory but why must it continue to mindlessly pull down the home of riches?  It is so painful that with so many experts in the fields of health and medicine, death remains intractable.  Cardiologists, hematologist, orthopedists, anatomists, pharmacists and pharmacologist – all these make health, healing and prevention of diseases their business.  We also know that at the name of Jesus, every knee shall bow.  Why is death not bowing?  Jesus also has the key to death and hades, why is death still rampaging.  But for death sha, may be oppression would have continued to multiply.  If oppressors know that death would knock them down one day and they still operate the way they do, it is unimaginable how it would have been if they enjoyed eternity.  The other day, a Senator-elect visited an adult toy shop.  He was provoked by the action or mannerism of a nursing mother.  He must have concluded that she lacked proper upbringing.  He decided to visit an avalanche of slaps upon her, not minding if she dropped dead.  The Senator-elect might have sentenced her to a year of torture if there was no death.  A smart politician, he caused some TV channels to broadcast that the video of his action that went viral was from a decade earlier when he got an ambulance to rescue his sister who was in distress.  Supposing there was no death?

How would Babangida, or later Abacha have run their regimes if they were guaranteed power without end?  Their detainees would have rotten in jail.  There was also the examiner that threatened a candidate with failure. Olympus, an elder friend told us how a particular examiner made his son spend seven years to complete a four years programme.  He might have spent 50 years!  Without death, there could have been no retirement.  Public servants would have held sway forever.  Permanent Secretaries would have been Eternal Secretaries.  In a federal constitution the President and Governors would have been real executive in power.  Party executives and leaders would have made local council functionaries real local.  They would have known that there is a world of difference between a level, and a tier of government.  And those of us, citizens would have appreciated what it means to be supporters, enthusiasts, constituents, sympathizers, activists, deflectors and decampees.  Independent National Electoral Commission would have registered thousands of political parties and some politicians would have crossed carpet on their birthday.  Cross carpeting would have been a way of celebrating.

Some pastors would have operated in unrighteousness and cause grace to multiply.  But those who remember they were raped decades ago would have made their protest, a profession.  In a community of hypocrites like ours, it is native doctors that would have continued to molest them and go scout free.  Big gals who patronize herbalists more often, but would give testimonies in churches because such places are modern and befitting would keep mum, would not report babalawo abuse.  His operation is not in the public glare as much as the pastors.

If there was no death, motorists would have been more reckless.  Drivers would have been more drunk.  We would have known what it really was to be power drunk.  The haughty would have been unrestrained unlike now when sickness humbles the arrogant and the mortuary strips naked the powerful.  The beautiful, the handsome, the pretty and the fashionable will die.  Geniuses, precocious ones with excellent minds will be cleared by death.  It is a pity that Death also operates in suspense.  It comes calling any day, anytime, anywhere until it has gone round.  No doubt the wicked one, death is also a leveler.  Atheists, backslider, Christians, muslems, ifa worshippers and the traditionalists would all go.  Those that can pay for the best medical services including new organs will go.  Those that cannot afford medical services may even survive them.  As we mourn the dead, so shall we be mourned or mocked at death.  It is no subject of ridicule that another has surrendered to death.  But it is not out of place to remember that we can function in this capacity simply because death has not shown up.  All wisdom, all powers, all connexions, all strategies fall flat before Death.

We do not know who is next in turn.  It is wisdom for us to examine our ways and turn a new leaf.  One may evade EFCC, ICPC, CCB.  Learned men and women can secure injunction to avoid trial.  No power, no knowledge, no riches, no connexion can rescue from Death.  Gbenga Oguntimehin, Akure Ooyemekun, professional teacher, industrial chemist, my friend of many decades is the latest. My condolences to his family, and Adeyemi College of Education.