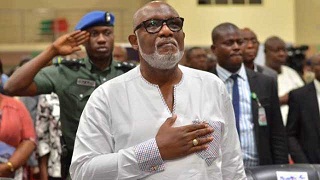 By Adekola Afolabi
|
Ondo State Governor, Arakunrin Oluwarotimi Akeredolu has stated that security votes being given to governors was never for their personal use, as being insinuated in some sections of the media, but to secure the lives and property of their citizens.

Akeredolu stated this during the South West Geo-political Zone Security Summit, organised by the Nigeria Police, in Ibadan in which the Inspector General of Police, (IGP) Mohammed Adamu was present.

Akeredolu, represented by his Deputy, Mr Agboola Ajayi, said securing lives and properties of citizens was not cheap.

The governor said that recently, his administration spent over N250m on procurement of boats for the Nigerian Navy to secure the riverine areas of the state.

It would be recalled that Funke Olakunori was killed along Ore-Lagos Highway in a failed kidnap attempt.

The State Governor noted that the state has purchased vehicles that will be given to security agencies in collaboration with other five states of the South West. The Governor said the DAWN Commission is trying to engage local vigilante to collaborate with security agencies.

He noted that this would not be achieved without involving traditional rulers who are the custodians of culture and who know everybody in their communities. We are doing all of these so that we can sleep with our two eyes closed.

His words: “With the little resources at our disposal, the Ondo State government will continue to do its best. Not only that, we have done the security summit which was organised by the state government where all the critical stakeholders were involved. Very soon, we will launch the Security Trust Fund that will take care of the security arrangement of the state,” he said.

Akeredolu said that the entire riverine and other border communities were very porous and urged that security agents should try and ensure that  checkpoints are well manned.

“Our border communities are very porous and the security agents should do their best to ensure that there are well improved checkpoints in and out of Ondo State”.

Earlier, the IGP, Mohammed Adamu said that this was the second in the zonal meetings which took off in Katsina for the Northwest zone.

Adamu revealed that the first summit for the North West zone has been yielding results with various arrests and reduction in banditry.

The IGP revealed that special operations for safer highways, with CCTVs, to tackle kidnapping and armed robbery would soon commence in the region.