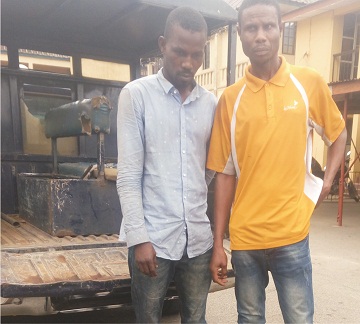 By Michael Ofulue & Kayode Olabanji
|
The Ondo State Police Command have nabbed two suspected syndicate in Akure who allegedly  specialise in robbing  bank customers by trailing them after withdrawing substantial amount of money .

The two suspects  identified as  Kingsley Ngbi and Jubril Alazigha, who are both indigenes of Bayelsa state were alleged to have conspired last week to trail a woman who had just  withdrawn a N975,000 from a commercial bank in Alagbaka,   Akure.

According to the Police First Information Reports (FIR) made available to The Hope Metro the hoodlums trailed the victim  in their Toyota Corolla vehicle .

On getting to a spot around Olasco building,  Oba Adesida road, they reportedly forced the woman to stop her  Sienna vehicle and dispossessed her of her money.

Police sources hinted that  men of the Special Anti robbery Squad (SARS) were alerted  and they  pursued and arrested the suspects.

The Police Public Relations Officer, PPRO, Mr Femi Joseph, who confirmed the story said upon interrogation, the duo confessed to the crime.”

This made the complainant, one Yemisi Ogidan to jump  out of the vehicle and ran for safety as she was threatened to stop. Police image maker  said the hoodlums, who came out of the vehicle,  damaged the Siena car and made away with about  a million naira.

” Officers of the Special Anti Robbery Squad (SARS) of Ondo State Command took over the case which consequently led to the arrest of the suspects.

“The PPRO said the suspects confessed to the crime and added that  belonged to a syndicate  that they specialize in robbing unsuspecting bank customers by trailing them from the bank after withdrawing substantial amount of money.

Six master keys and the vehicle Toyota Corolla REG No. YEN 99 HB, which they used in perpetrating  evil act were recovered from them, he said.

He said they  were thereafter  taken to the Magistrate’s Court sitting in Oke-Eda for  arraignment but  were returned to  the police custody as Magistrates were said to be attending a seminar.

Joseph,  however, said the suspects would be taken back to the court .