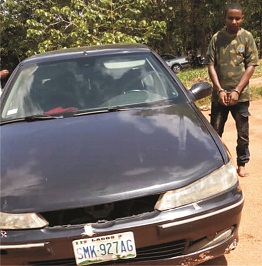 By Tola Gbadamosi
|
The Ondo State Police Command on Wednesday paraded a 31-year-old serial vehicle snatcher, Abubakar Aliu, who specialises in stealing vehicles from one state to another.

During a press conference, the police said  the suspect identified as Abubakar Aliu, went about impersonating as Colonel Farouk Aliu, to snatch vehicles from state to state.

He was  intercepted at Enu-Owa Division Ondo on October 5, 2018 and later transferred to Area Commander, Ondo.

The police said Aliu, a native of Kaduna State, who claimed to be one Col. Farouk Aliu, while putting on an Army Camouflag T.Shirt,  took a Naval colour Peugeot 406 saloon car with  registration. No. Lagos SMK 927AGL, to a mechanic workshop, at Oka street, Ondo town, for repair.

On getting to the workshop, he was said to have seen a Toyota Sequia Jeep with Reg No. AGL 230 EH displayed for sale, in which he showed interest in buying it and negotiated the price  at N1.2million.

The Hope Metro learnt that the suspect, who suggested taking the vehicle for test drive,  with a promise to use the opportunity to  withdraw money, went away with the jeep and abandoned the Peugeot 406 saloon car he brought.

The Public Relations Officer of the Command, Mr Femi Joseph who spoke to newsmen said, the Peugeot 406 with Lagos registration number he came with was left behind and absconded with a Toyota Squoia Jeep their  after we commenced his investigation from Areas command in Ondo.

It was further gathered that investigation is ongoing to locate the owner of the Peugeot 406 which is suspected to have been stolen.

The state Police Public Relations Officer,  Mr Femi Joseph, said, “The Peugeot  406 of Lagos  Number as bloted with the accured. He left the car and we commenced his investigation from  Area command in Ondo.

“He was trailed to Agedu, in Kogi State, where the required vehicle was intercepted from him. He confessed that he is a serial vehicle  snatcher and had stolen several vehicles over the years.

“We, consequently arrested him. But  unfortunately, the vehicle has been  vandalised. That is the main reason  we cannot  bring the vehicle here today.

“I want to use this opportunity to inform Nigerians who must have lost their vehicles to any thief or robber, to come forward and identify their vehicles.

“The owner  of the identity card is my brother. We are  four in number coming from up North. I used to go from town to town and state to state, snatching cars and living large. We don’t do all these ordinarily. But we use “Juju” .

I have a ring  which is charmed. Whenever I am talking  to  people, or making request from anybody I encountered,  I rubbed my two palms together, so the person will believe at once and do whatever I demanded.

“I got  to Ondo state where I met a mechanic. The man is a Yoruba man, but he understands Hausa. That gave him the reason to trust me. I used my charm on him, and told him I am interested in his Jeep, which I priced  for N1,200,000.

” I went to Kogi state, where the car got  stopped. That was where I was caught by the Nigerian police. And I met myself here.”