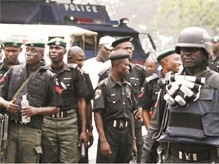 From Jimoh Ahmed,  Ikare Akoko
|
The seven-man kidnapping gang that has allegedly been terrorising the  people of Ajowa, Akunnu and Auga  Akoko in Akoko Northeast Local Government area of Ondo State, has been arrested.

The gang was nabbed by the combined security agencies, consisting of soldiers, police and DSS at Ajowa following a failed kidnap attempt.

The Hope Metro reliably gathered that luck ran out on the suspects, when a 45-year-old graduate teacher and a Muslim cleric, Alhaji Jamiu Zakariyahu was abducted at gunpoint while coming from the  mosque where he usually leads the congregation in prayer  at  Daja,  Ajowa.

Narrating his ordeal, Alhaji Jamiu said the kidnappers  pushed him off his motorcycle after flagging him down and immediately  covered his face with mask and led him to the bush.

According to him,  he met two other victims whose legs and hands were tied and blindfolded.

He said they demanded N10 million ransom which they later reduced to N5 million.

It was learnt that the negotiating team told the abductors that the captive is a teacher whose family could not pay more than N250,000, which they agreed to collect.

Miraculously on  the second night in the kidnappers den, Alhaji Jamiu disclosed that the rope which was used to tie him loosed miraculously and he hastened to untie the other victims.

Alhaji Jamiu said this happened while the kidnappers were deeply asleep.

He stated that himself and the other victims took their chance and escaped into the bush while a local hunter on motorbike later carried him to Ajowa.

It was gathered that  soldiers at the Akunnu/Ajowa military check point with the assistance of a top community leader in  the town tracked the two  phones seized from the victims  in the bush which led to the arrest of the son of a prominent Chief in Ajowa.

He was said to have later led the security men to arrest three other members of the gang in their hideout, while others are still on the run.

Meanwhile the suspects have  been taken to Akure by the military.