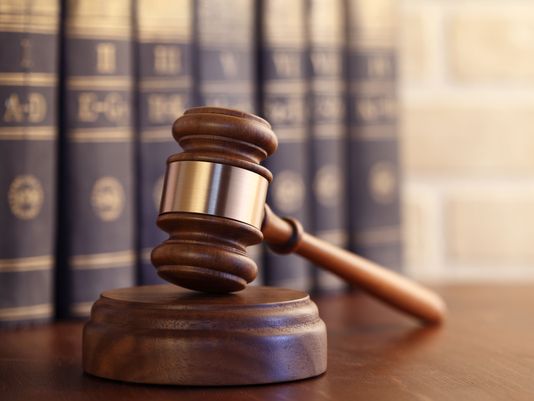 By Kayode Olabanji
|
A serial thief, Lanre Abiodun, was on Thursday, sentenced to two years imprisonment by an Akure Chief Magistrates’ Court, sitting in Oke-Eda, Akure metropolis,  for stealing a phone and necklace.

The convict, Abiodun, bagged the jail term for stealing a Tecno W3 phone valued at N15,000 and a necklace worth N3,500, property of one Lekan Afuye.

The magistrate, Mrs Victoria Bob-Manuel, found the convict guilty of the two-count charge brought against him by the police and sentenced him accordingly.

Abiodun, was said to have committed the offence on February 14, 2019 at about 2:00am, at Ifelodun street, Plaza area, Akure.

He was also alleged of damaging the window net of the complainant , Afuye, through which he gained entrance into the room and stole the items.

The convict had earlier pleaded guilty to the charge when it was read to him.

The prosecutor,  Sgt. Suleiman Abdullateef, told the court that Abiodun was arrested by some security men living in the area, who  handed him over to Ijapo, police station for interrogation.

According to the Police First Information Report (PFIR), read by the Investigated Police Officer (IPO),  Sgt. Obadasa Ajiboye, the convict is a native of Akure, who dropped out of school when he was in Senior Secondary School and went to learn mechanical work, but later withdrew.

The report revealed that the convict in his statement confessed he also stole a generator, motorcycle and some other things.

Ajiboye, who disclosed that the convict had severally been dragged before the court on different cases, pointed out, he is not ready to change for good.

In her ruling, the Magistrate, Mrs Bob-Manuel, said the convict is a 23-year-old man, who had earlier been arraigned in  court, in another case with suit number: MAK 103C 2018 with different names, Sunday Abiodun now  Abiodun Lanre.

She stressed that the convict  had to be kept away from the society in the meantime and  therefore sentenced him without an option of fine.