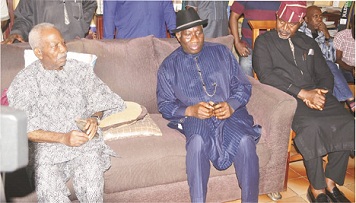 By Sunmola Olowookere & Adekola Afolabi
|
Former President Goodluck Jonathan has called for the setting up of a special agency to tackle terrorism and kidnapping in the country, noting that government’s present approach is not yielding the desired results.

Jonathan, gave the advice during a condolence visit to Pa Reuben Fasoranti over the killing of his daughter, Mrs. Olufunke Olakunori.

His words: “I believe the federal government will set up a special agency that will tackle kidnapping and other terrorist attacks just like it set up EFCC to handle issue of corruption.”

The former president, who described the current insecurity in the country as worrisome, urged the federal and state governments to collaborate in their efforts in tackling the situation.

Jonathan who described the death of Olakunori as a painful one, urged governments at all levels to develop  technology driven security agencies in the country.

He stated that kidnapping and other terrorist attacks must be tackled decisively.

He noted that armed robbery graduated to kidnapping in 2006 which was tagged as a commercial kidnapping leading to the payment ransom.

He said incidents of violence had culminated in terrorist attacks Nigeria is witnessing whereby armed bandits would block roads and start shooting at defenseless travellers.

He admitted that when he was president, his administration was confronted with security challenges too, saying that Nigeria has not been able to develop its economy and infrastructure due to the level of insecurity.

Jonathan, who also recommended document of the 2014 for implementation noted that  the report contained articles on state police and measures that could tackle insecurity.

He urged the federal government to look into the report with the aim of proffering solutions to the current problem.

Meanwhile, a factional leader of the Pan-Yoruba Socio-political group, Afenifere, Pa Ayo Fasanmi, has described the death of Mrs Olufunke Olakunori, daughter of National Leader of Afenifere, Pa Reuben Fashoranti, as a tragedy.

Pa Fasanmi who led members of the group to commiserate with Pa Fasoranti who he described as his bosom friend at his residence in Akure decried high level of insecurity in the country.

He called on governments to urgently address the issue and protect the lives of the people.

“In recent times, a number of people have been killed in Yorubaland. Yoruba people irrespective of their political and religion backgrounds must come together to address the situation. We must all come together to savage this country, we must tighten up the security so that our lives and properties can be saved,” the nonagenarian added.

The 94-year-old Fasanmi emphasised the need for the nation’s security to be tightened up safeguard the lives and property of the citizenry.