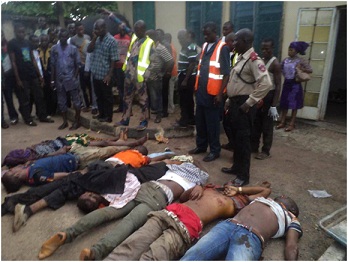 No fewer than seven persons lost their lives in a ghastly auto crash which occurred in Ekiti State.

Similarly, ten person’s whose identities were yet to be ascertained also sustained various  degree of injuries in the accident.

The accident, which involved an Ikare-Akoko- bound 18-passenger bus and a Toyota car, which had an head-on collision along  Iluomoba-Aisegba highway, Gbonyin Local Government Area led to the death of the casualties.

An eyewitness told  our correspondent in Ado-Ekiti on Thursday, that one of the vehicles was about dodging a pothole at a sharp bend  on the road and was said to have lost control, and collided with the oncoming vehicle traveling to Ado-Ekiti.

The news that earlier filtered into town was that, about 16 persons lost their lives during the accident. But the information was refuted by the Federal Road Safety Corps (FRSC). Ekiti State Command.

Confirming the incident, the Sector Commander, FRSC in Ekiti State, Mr. Olusola Joseph, who refuted the report that 19 persons died, revealed that the number of passengers that occupied the two vehicles were 17.

The Sector Commander clarified  that seven passengers lost their lives and the victims had been deposited in the morgue.

The FRSC boss said,  “Those who lost their lives had been deposited in the mortuary. They were all male passengers. They were occupants of the two vehicles.

“The passengers that suffered varying degrees of injuries are presently being treated at the Afe Babalola Multisysstem hospital in Ado Ekiti”.

Joseph, who warned motorists against overspeeding, described it as the cause of  unwarranted carnages on Nigerian roads.