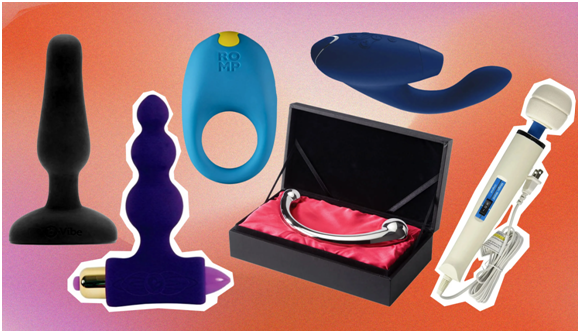 Deke(pseudonym), a 21-year-old undergraduate has been using sex toys from secondary school days without the knowledge of her parents after she visited a friend who taught her how to use it.  The lady who disclosed that most female secondary school students are good users of sex toys maintained that it curb promiscuity, reduce stress, satisfying and make her to be more focused. “Sex toys relax our bodies and improve mood,” she added.

Her words: “Though, curiosity led me to using sex toys but it was an alternative, instead of being promiscuous and contracting Sexually Transmitted Diseases (STD)and other infections.  That is the more reason ladies in higher institutions and some girls in secondary schools never joke with it.  Sex toy doesn’t move around like a man or woman does. Besides, I have since realized that it has a way of relaxing the body, helps to boost mood and ease sexual tension. It has become part of me that without it, I can hardly read and comprehend. It helps my brain to relax and assimilate optimally.

“Another reason I enjoy using sex toys is its unique way of  jerking  which natural sex cannot achieve. Also, the fear of unwanted pregnancy does not come to mind with the use of sex toys. Good number of unmarried female students  rely on sex toys to satisfy their sexual desires and it  aid them academically.”

Deke who further revealed that she was in a relationship, added that her fiancé and parents did not know she is using sex toys but promised to stop using them when she get married.

“Using sex toy is not a big deal, female  students,  unmarried ladies, single mothers use them for sexual enhancement. It is much more easier using it once you have it because it saves you the stress of running after guys who are mostly unreliable. The only issue I have with it is that you cannot continue with the same size of sex toy you started with, you will need a bigger size as you progress for full satisfaction,” she disclosed.

Asked how much it cost and why she was hiding it from her parents and fiancé, she said: “The price varies. It depends on the size and hours it works. There are some you can get for N4000 and above. But the higher the price, the higher the enjoyment. I did not disclose it to my parents and fiancé  because of the society we live in. My father will disown me if he gets to know, yet, sex toys are not as bad as ignorant people portray them. What the society believes about sex toys is wrong. Not everyone is open-minded about it despite its many benefits. We haven’t got to that stage as a society, so it is wise I keep the secret to myself,” she said.

Also, a 52-year-old single mother of four, Ayo Toba, who described sex toys as her companion, explained that she resorted to sex toys for sexual satisfaction because she did not want to remarry.

Her words: “The fear of facing challenges of marriage if I remarry  pushed  me to settle for sex toys. I noticed that I have been sexually starved since the death of my husband five years ago. You should understand that going by our cultural practices,  people will call me names if they see that I remarry as a widow after four children.

“Besides, my husband’s family have warned me severally against remarrying. Otherwise, they said that I would forfeit all the property my late husband left for me. I confided in a family friend, a single mother of seven years about my urge for sex and asked her how she has been coping sexually without re-marrying since her husband died; she revealed to me that most widows, unmarried ladies and single mothers turn to sex toys for sexual solution and connected me to different sex toy shops which has since be of help.

“It was then I discovered that sex toys have been serving as alternative to men for single mothers with high libido like me. It is affordable and costs nothing to maintain than to buy the size that suit you and get it charged. Once that is done, you are good to go. I am at ease with it because it prevents unwanted pregnancy, sexually transmitted diseases and give me equal natural sexual satisfaction.”

Another user of sex toys, Mrs Jet Emodi, stated that the use of sex toys was mainly for convenience because they could not penetrate like the normal sex. The woman revealed that her inability to enjoy sex or attain orgasm in a marriage of three years with kids as a result of being circumcised led her to using sex toys.

She said: “I disclosed to an aunt that I have never enjoyed sex or attained orgasm in my three years of marriage despite having kids. She asked if I was circumcised and I said yes. She then attributed my lack of sexual enjoyment to it and advised me to try sex toys. Though, my husband is aware of my lack of sexual enjoyment but I can’t tell him that I have found succour in sex toys because of his reactions to sensitive issues. He will misconstrue  the whole matter and keep reasonable distance from me.”

Asked what she would say if her husband discover her secret, she said: “I don’t think he can discover because he doesn’t live with me. Due to the nature of his job, he only comes month ending spend days and go back. But if he eventually discover, I will remind him of my complaint  about lack of sexual enjoyment and let him know that I am scared to tell him. I will be ready to take whatever blame and apologize. I have nothing to fear because I am not cheating on him. After all, he trust me. Well, I will cross the bridge when I get there.”

The woman who described sex toys as luxury goods for only those who care about their sex life said: “Since I started using it, it has improved my performance with my man. Another thing that delights  me about sex toys is that they are affordable. One can get it as cheap as anyone can think of but the price determines the level of enjoyment,” she said.

Asked to differentiate between real sex and sex toys, she said that sex toys are like sex booster. They are like make ups or other enhancements used in everyday life. Being a booster, you don’t use or depend on them all the time. Just like you could go out without make-up. “Though the vibration of the toy makes the whole sexual intercourse enjoyable and satisfying but cannot replace men because they cannot penetrate like the natural sex,” she revealed.

Speaking on the dangers of using sex toy, a medical doctor and sex therapist, Dr Malik Haruna, noted that generally, sex toys don’t pose any form of physical threat but warned that it could cause injury if connected to electricity which could be unsafe.

He added that those who use sex toys alone tend to develop a dependence on the tool which could negatively affect a healthy sexual relationship with another person. He counselled the public to use the tools responsibly and cautiously to frustrate addiction.

The medical expert advised people to be wary of infection, injury, and allergy that could result from their use, adding that one’s body might react to the materials they were