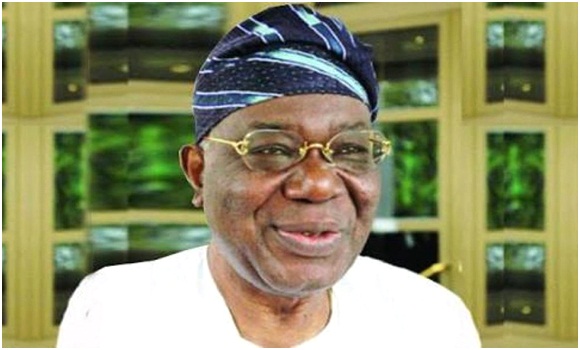 Chairman of the South-West Governors’ Forum and Ondo State Governor, Oluwarotimi Akeredolu, has described the death of elder statesman and former Head of the Interim National Government, Chief Ernest Shonekan,  as a huge loss to the country.

Akeredolu said the vast experience of the elder statesman was an asset to the country, particularly with the array of challenges confronting the nation.

It would be recalled that it was during the Chief Shonekan’s reign that Ondo State was enlisted among the oil producing states in the country.

The Governor noted that he received the news of the death of Chief Ernest Shonekan with a heavy heart.

According to the Governor, late Shonekan was committed to the peace and unity of the country, and pursued it with vigor and dedication as a patriot.

Akeredolu, in a statement signed by his Chief Press Secretary, Richard Olatunde, maintained that the service of the former Head of Interim National Government will never be forgotten in the annals of history of the country.

“Chief Ernest Shonekan was a nationalist per excellence. His belief in a United and Peaceful Nigeria was unparalleled. He was dedicated to the progress and development of the county. He will be sorely missed.

“His historic and patriotic role in maintaining the unity of the country was one of the many things that endeared him to many. He was indeed, an asset, his counsels were useful for national cohesion and progress.” the Governor said.

Akeredolu, however, prayed God to grant the deceased eternal rest, while commiserating with his wife, the government and people of Ogun State.

Speaking with The Hope in a separate interview, the eminent citizens  described Shonekan’s  tenure as brief but eventful particularly to the old Ondo State adding that he will always be remembered for good

Some of his achievements according to the people include the enlistment of Ondo State into oil producing states,  establishment of Federal Science Technical College, Ikare Akoko among others

A chieftain of Pan Yoruba Socio Cultural Group, Afenifere, Chief Korede Duyile said the late former Interim President,  will be remembered for all his good deeds before his death.

Shonekan , he said used his best position as former Interim President to include Ondo State as an Oil Producing State during his three months reign.

“As far as Ondo State is concerned it was under his reign as interim President  that decision to include Ondo State as Oil Producing State was taken.

“That is the major thing we had from him” he said

Duyile who was a former member of the House of Representatives said “before his death he had lived a better life though as aged person, person will die at a particular age ”

The Chairman, Supreme Council For Islamic Affairs Akoko Northwest local government,  Alhaji  Basiru Aminu, noted that his tenure as president was very brief but so beneficial to Akokoland as the Federal Science Technical College, Ikare Akoko, was established.

Another  Akoko leader Chief Jamiu Oluke described him as a simple and peace loving person.

He described his tenure at UAC holding plc as very remarkable and rewarding.