Should husbands be allowed in labour room? 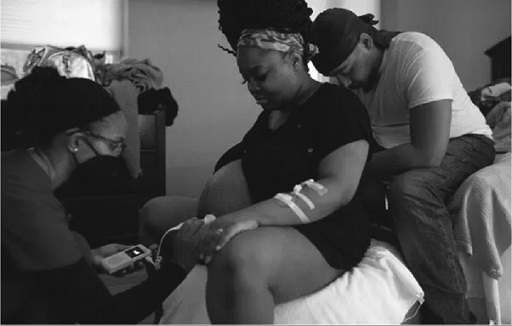 Carrying pregnancy for nine months is most time a delicate period for couples, especially the wife who houses the unborn child. Women need love, care and support from their husbands to navigate through this period. Some expectant mothers believe that the best way their husbands could be part of the process and actually understand the joy of carrying pregnancy  is to be in the labour room with them.

Though, in Africa, Nigeria in particular, the culture does not support the idea of men going into the labour room with their wives for rather unexplainable reason.  Instead, they are expected to be somewhere praying and expecting the good news. This general belief has been condemned by some couples on the ground that since the man and the woman are both responsible for the pregnancy, there is no justification for the husband not to be in the labour room with his woman.

They added that men who cannot stand the labour room experience should not think of putting women in the family way. Others who maintained that men have no business  in the labour room explained that it is against the cultural norms, adding that  they should be excused so that they can commune with their creator for the safe delivery of their wives.

The Hope spoke with some couples if it is ideal for husbands to be in the labour room.

A teacher, Mr Oluwaseun Aina, said that it is unthinkable for men to be in the labour room and that he would not  support the idea.

He said: “Hubands don’t necessarily have to be in the bed side when the wife is having the baby, but should be seriously praying for the wife at that period. I don’t think I can stand it. When my wife wanted to have our first child, I thought it was the normal usual pain that could be managed at home. As the pain progressed  I almost ran mad watching my wife in such condition. My whole system collapsed to the extent  that I called a friend to drive her to the hospital. Thank God she delivered safely. It was my friend’s wife who was with her. She put to bed before her mother came.

“When my wife was pregnant for the second child, I brought her mother a month to her delivery date. When she was having usual labour pain at home, I managed to drive her to the hospital and did not go there until I was called that she had been delivered of her baby. I must tell you that I prayed more when she was pregnant,” he said.

Sharing a similar view, a businessman, Mr Kenneth Ogbona, who has been in the labour room during the birth of his second child shared his experience. He said: “ I promised my wife to be in the labour room with her during the birth of our second child because I was not around to witness that of the first child. I drove her to the hospital when she began to experience   sign  of labour and stayed with her. The nurses on duty asked me to excuse them but I insisted to be there.

“I was sent to get something, before I came back, I could not recognize my wife again. She had pulled off her clothes including earrings sweating profusely under the fan. Then, I was no longer myself. My phone was rigging but I could not pick. As she was  wheeled into the delivery room, I ran outside the labour room crying and calling on God. If my blood pressure was to be checked then, it would have been alarming. Even after an hour that my wife delivered, I was still not myself.

“I was traumatised and promised never to have another child again. That explains the age-gap between my second child and the last child. Thank God that we went further, my last child, the only girl is doing wonderfully well. Since my labour room experience with my wife, I now shower her with uncomon love and affection. To be candid, not all men can stand the labour room experience.

Also, an artisan, Mrs Yinka Bodunjo, opined that men should not be allowed into the labour room. She disclosed that it was not the duty of any man to be in the labour room with his wife because the society frown at it.

She said: “Though, there is this kind of feeling among women that you got me into this, I have carried the baby for nine months and now, I have to go through labour to deliver the child. So the least you can do is to be with me in the labour room. Yes it is true, but I must tell you that 97 percent of men cannot stand the labour room experience.

“I personally know a man who fainted during his wife’s labour. A friend also told me that her husband ran out of the labour room when he could not stand watching her wife go  through such pain and agony in her quest to bring forth a baby. Sincerely speaking, labour room experience will weaken the most valiant man. Besides, some women instead of being courageous and strong will tend to pretend if their husbands are allowed in the labour  room,”  she said.

Speaking differently, a civil servant, Mrs Adijat Ayanfe, hinted that a man should be allowed into the labour room, to see what her wife was going through so that he could better appreciate her.

She said: “ If need be, my husband should be  in the labour room to see what I have to go through to bring forth our child because of his unbecoming attitude. After all, we both contributed to the emergence of  the child,” she said.

A social commentator, Mr Ayodeji Komolafe, also advised that husbands whose wives are pregnant should be made to go through the labour room experience to correct some social vices in the country.

His words: “ The labour room experience will help to educate every putative patriarch that women go through a lot through procreation of perpetuate mankind. It will make one to appreciate better the enormous sacrifice of mothers. It may also help to stop the senseless killings when they witnessed how difficult it is to bring forth a soul. The labour room experience may restrain people from recklessly taking lives as they do now. I have experienced it during the birth of my first child and I knew the untold pains and agony women goes through to bring forth.

“Men are part of their wives’ life as they are emotionally, physically and mentally attached to each other, which makes them one hundred percent qualified to be in the labour room with their wives to experience that period of hardship, pain and joy which sums up the entire definition of child labour/birth. If you are man enough visit the labour room. God bless all our women.”