Home General Features Should parents apologise to children when they are wrong? 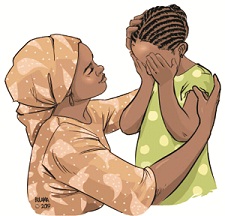 Should parents apologise to children when they are wrong?

By  Maria Famakinwa
|
One of the ways a child is brought up to fit into the societal norms, value and be accepted is to learn how to apologise when he/she errs. Doing this proves that the child is taking up responsibility, and credit goes to the parents for good upbringing.

In as much as apologising for a wrong doing is one of the ethics of moral behaviour, there has been considerable debate on if it is right for parents to apologise when wrong their children. Those who believe  that there is nothing bad if parents apologise to their children when they wrong argue that since everyone has emotion, apologising to one’s children teaches them to do same  when they are  wrong .

Others who view such idea differently claimed  that it is wrong for parents to apologise when they  do wrong to  their children because to them, children nowadays should be raised strictly.

In her submission,  a trader, Mrs Layo Olugbenga, explained that it is very important that parents apologise to their children when they wrong them so that they can do same to others when they err. She said,” Apologising to your children when you hurt them teaches them valuable lesson of accepting their mistakes and apologising when they wrong others. Do you know that there is a direct link between how you treat your kids and how they turn out in future?

”If you treat them harshly, that is how they will most likely turn out to be. I will like to raise my children to become compassionate, considerate and kind. I cannot understand how anyone will think that it is wrong to say sorry to a child when you are wrong, no wonder there are proud, arrogant and impolite people walking around thinking the world revolves around them.”

Sharing a similar sentiment, another parent who is also a teacher, Mr Linus Adewola, averred that apologising to one’s children teaches them that we all make mistakes and demonstrates to them how intelligent and kind human beings can be and further strengthen the bond between parents and children. He revealed how one of his students felt when he was hurt by his mother who refused to apologise.

His words,” One of my students sometimes reported her mother to me for beating him wrongly when she misplaced an item at home, accusing him of taking it, only to discover that she was the one who misplaced it. The 10-year- old boy told me that he was not happy with his mother. I called the mother and explained to her and she immediately apologised and promised to buy him a gift, it was then the sad boy became cheerful and happy. What would have happened if the boy did not speak out? Parents should learn how to apologise when they err their children,  and teachers also to their students,   because emotional pain scars into adulthood for many people.”

Speaking differently, a businessman, Mr Frank Edwin, opined that it is wrong for parents to apologise to their children if they wrong them as doing so according to him weakens and usurps parents’ authority. His words,” I cannot recall a single time when my father or mother offered me an apology and I cannot do same to my children. As a father, whatever I did came from a place of love and care. African parents rarely show emotions, but we all know that they never compromise their children’s love.

”If all I have been labouring for is to give my children promising future and someone is claiming that if I fail to apologise to my children when I offend them is wickedness, let it be, we are all entitle to our opinions.”

A self -employed mother of three, Mrs Ayo Opoola, also hinted that it is wrong for parents to apologise when they wrong their children, as doing so according to her gives them feelings of self importance and they start to act spoilt. She said,” Most parents are really missing it these days regarding giving their children right training, which is why most of them are into internet frauds and other social vices. Parents should be told that  nowadays children must be strictly raised without any sentiment so as not to jeopardise their future. Apologising because you wrong your child is pampering and any time you fail to apologise when you wrong him/her might lead to the child insulting you because a bad precedent has been set.”

A counselor, Mr Ayodeji Adeola, in his submission, explained that it is difficult for most parents to apologise because they feel that African culture does not believe parents can wrong their children not to talk of apologising. He however urged parents to study their children to understand them better because children react to issues differently.

His words,”To the glory of God, I have twins, a boy and a girl. To my surprise, the boy gets emotional easily than the girl. There was a time the mother offended them, while the boy was sobbing seriously, the girl did not bother their mother noticed this and said sorry to the boy and that was all. Saying I am sorry can solve a lot of problems and it does not take anything from one. We should also bear in mind that children of today are different from when we were growing up. There are some children who can hold on to  a wrong done against them for a long time, this can strain the relationship they have with such person and also affect them psychologically. Even the Bible warns parents against making their children to be angry and if mistakenly it happens, hugging your children and saying sorry settles the issue, which further strengthens intimacy between parents and children. So, there is nothing wrong saying sorry to one’s child if one  errs.”