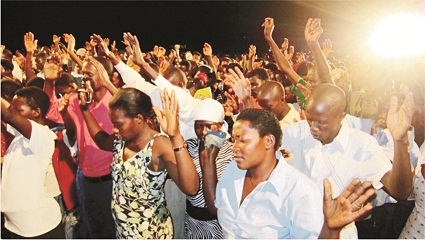 By Maria Famakinwa
|
Churches across the country have Sunday services and also organise weekly programmes  to give room for government workers who usually close by 4pm to partake in the service. This according to them is necessary to make their members more equipped spiritually, committed to God’s work and to get more members who can propagate the gospel of Jesus Christ.

Findings by The Hope have showed that most of the churches in the recent time have extended their weekly services to working hours which makes civil servant members to either excuse themselves from work to meet up with different church services which starts from 8.am and lasts for three to four hours.

The situation becomes serious if it is the first day of the month as government workers attend early morning church programmes usually slated for that day. Some will be sighted on different mountains praying when they are expected to be at their duty posts at that productive hour.

The Hope spoke with some pastors and workers on this issue. While some condemned the act and described it as cheating the government and liken it to corruption, some see nothing bad in it if those concerned  are permitted to go as they argued that everything needs prayer.

The General Overseer, Christ Heritage Assembly International, Bishop Olugbenga Odusoga explained that the problem is lack of understanding on the part of some pastors and some children of God and that most christians do not understand the Bible as he quoted from the book of Hosea 4:6 that “my people perish for lack of knowledge.”

“Many children of God do not understand the ways of God. They only understand the act of God which are miracles, healings, protection, provisions among others while the ways of God are the principles of God and one of it is order. God is a God of order according to the book of 1Cor. 14:33 and verse 40 of the same chapter says that everything must be done orderly.”

The Bishop, who condemned the act of workers leaving their places of work for church programmes, maintained that God does not in any way support cheating anyone talk less of cheating government where you are earning salaries.

“The book of Romans also urged Christians to obey the government. So when you are using government hours for spiritual things, you are stealing from the government which is tantamount to corruption.”

Reacting to those who were given permission, he said, “such permission should not be every week because if you employ a person to look after your shop and the person keeps taking permission every week, will you not sack the worker? Let us be sincere, no private establishment can allow such. “

On the way forward, he said that “there should be re-orientation on the part of Christians through education and sensitisation and anyone who fails to adjust among the workers should be sanctioned by their employers.”

Sharing a similar sentiment, a Redeemed Christian Church of God pastor, who is also the Regional Director of Music for the denomination in Ondo, Ekiti and Osun States, Pastor Babatunde Omotoso also described the act of government workers attending any church programme during productive hours as cheating the government and called for things to be done rightly.

“In as much as one gets paid for those hours spent in different church programmes, it is like defrauding your employer which is a sin before God. Even, if anyone claims to be given permission, such should not be a weekly affair. Civil servants, according to the civil service rule, should justify the salaries they are earning instead of leaving their offices for church programmes. Anyone caught in that deceitful act should not blame the devil if they are sacked because millions of people are out there seeking for jobs.”

When told that Redeemed Christian Church of God is one of those churches organising programmes during working hours he agreed but said that such programmes are not meant for workers who are expected to be at their working place at that time.

“Programmes during working hours are not meant for salary earners who are to be in their different offices at that time. They are majorly organised for artisans, businessmen and women who could spare the time and those who are at home because we are not all civil servants.

“We have different categories of people in churches with diverse needs. We have some who are self employed and are not busy during these hours, those who fall in this group can attend such programme during working hours. We equally have others whose nature of job are the “shifting” type. If they are free during the time for the church programmes, they can also attend. Likewise, we have elderly men and women who can also go for such programmes, so it is not meant for civil servants and any of the government workers caught attending church programmes during the working hours should be ready to face the consequences of their actions.”

In the opinion of a civil servant, Mrs Abimbola Oluwole, she revealed that she used to attend 8.am programme in her church before she was employed but stopped since she has started working because her pastor often warned civil servants against leaving their duty posts for the programme which he often stressed can serve as hindrance to their prayers.

On if it is right for workers to use their productive hours for church programmes, condemned the act and advised those in the habits to desist.”

It is very wrong to receive salaries for the service you did not render. Though, some get permission from their offices yet, it should not be weekly. If you get to some offices during the week from 8am -1pm, you will understand how much government is losing because of this display of insincerity on the part of some workers. This is cheating your employer, which God is not happy about and this no doubt, hinders prayers.”

Another civil servant, Mr Linus Ololo blamed the problem of civil servants leaving their place of work for church programmes on many challenges they are facing, ranging from financial, marital, health among others and revealed that many believed their consistency in God’s presence can bring quick solution to their challenges. He disclosed that though many of the government workers know it is wrong to attend church programmes during working hours, but challenges put many of them in such compromising situations.