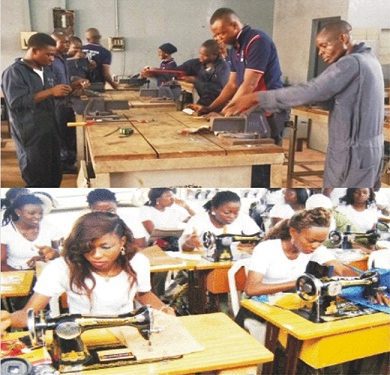 In Nigeria today, entrepreneurship is assuming a critical role in the economy because of widespread unemployment, which has led many young individuals to learn a craft or start a business, almost everywhere you turn, you are likely to find a young person who owns one business or another.

From Logistics, Food retail, cosmetics, event planning, interior design, fashion, style, Agriculture, tech or even as a Vendor, young people in Nigeria are trying to either start a new business or manage an existing business, despite the harsh and tough business climate in Nigeria.

Many young people have refused to be deterred by the harsh economic policies and are proving their mettle.

It is everyone’s knowledge that Nigeria as a country is going through hard times as a result of its fledgling economy associated with bad decision made by leaders .

With the current entrepreneurial bug hitting the global economic landscape, it is high time our youths leverage on this opportunity with the help of internet technology to create meaningful jobs for themselves.

But with little or no fresh recruits taking up apprenticeship for the different crafts and trades the bulk of which supplies manpower for the informal sector players such as vulcanisers, battery chargers, tillers, bricklayers, painters, plumbers, blacksmiths, masons, electricians, mechanics, to mention just a few, there are fears that this ugly trend which has already left Nigerians at the mercy of foreigners from neighbouring African countries and beyond, may further plunge this informal sector of the economy into a crisis of unimaginable proportion.

Some years back, President Muhammadu Buhari, shocked the world with his submission that Nigerian youths are lazy. Social media went agog with the news.

Investigations by The Hope revealed different mindset towards skill acquisition.

According to her “I remember when I was in school studying law, i thought my life would be smooth like I always see it in movies, but when reality hits me, I was shocked. After law school, I worked in a law firm that paid me N40,000 every month, which was definitely not enough to survive, that was when I knew I needed to acquire a skill, ever since i became a makeup artist, my life has been better, at least I can eat three times a day if not more, other youths out there should emulate this and learn a skill, entrepreneurship is the future” she added

Joseph Oyebanji, a photographer who shared the same view stated that skills learning has lifted many out of penury and carved a niche for them in the society. He however regretted that

said ever since he started photography, nobody has come to learn the skill from him.

His words, “ some youths are not acquiring skills these days, they prefer internet fraud because they see it as easy money, I studied Computer Science back then in school, but after many years of job hunting, I decided to consider learning a skill, which paid off, youth unemployment is one of today’s big global challenges. Everybody can’t be employed, we have to create employment for ourselves” he reacted.

Bello Abdul, a digital marketer said that he went into digital marketing and has been getting good returns from the business. He stated that social media marketing is also an acquired skill.

He said “There is money on the internet, I make mine by influencing products online, instagram, Facebook, Twitter and the rest. I like fast money, and social media has made that possible for me.” he added

Ayomide Olorunfemi, a business developer said it is becoming clear that one needs to keep one’s degree certificates in a safe custody for future opportunity, and engage in entrepreneur skills, otherwise one will die poor.

According to him; “Most of the educated people in Nigeria are poor. Majority of the educated earn less than N55,000 for a salary before tax and other deductions. When the deductions are put into consideration, the net salary comes to around N50,000. The net salary then suffers from loan deductions of up to N15,000 leaving the salary at around N35,000. The landlord then demands for his N15,000 and monthly shopping takes away N10,000 leaving one with a N10,000.

The taxi will demand at least N300 going to and from work and relatives get another N2,500. The whole salary is gone and borrowed money starts operating. The borrowed money includes short loans and salary advances.

“The biggest excuse for getting paid such low amounts of money and having to sit and work for another person for 30 days is the degree that one possesses and that’s all. This has made most of the degree holders very poor to poverty stricken and will die that way most likely.

A degree holder does not know how to generate money unless that money is generated for the employer. A degree holder is so dependent on the salary that he can do anything to get a job but will not think of starting a business of his own to employ others, therefore entrepreneurship should be considered after acquiring a degree” he said

In the same vein, Fisayo Ehindero, expressed that the system churns out thousands of graduates every year, and almost all of these graduates have the same mindset of seeking and getting a job somewhere.

“Whether or not we accept it, the job market is overcrowded and the government won’t give everyone a job. Whereas every serious government should be more concerned with creating a supportive and enabling environment than creating jobs for its people.

“Every individual has a talent and a passion, and their wealth and fame lies in their vigorous pursuit of those passions and talents.

“It’s about time everyone begins learning a skill OR start to develop some latent ability within them. There’s nothing wrong with adding a skill to your degree. It could be learning plumbing, professional driving, wiring a house, tailoring, selling, carpentry, painting, fashion designing, etc, or it could developing some soft skills like becoming a great communicator, writer, or even becoming a motivational speaker or personal development expert” he added