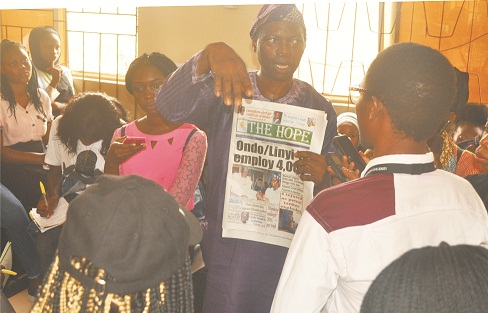 By Bukola Olamona
|
The advent of social media  now constitutes  a great threat  to the print media as it affects the circulation figure of newspaper  production across the country.

The Chairman/Editor-in- Chief of Owena Press Limited, Akure, Publishers of The Hope titles, Sir Ademola Adetula made this known while addressing 300 level students  in the Department of Mass Communication of the Federal University, Oye Ekiti (FUOYE)  who were on an excursion to the Company.

He  conceded that while the social media has advantages, its evil exploitation by unscrupulous  elements appears to be on the increase.

While speaking on the evil of social media, he stated that many of the writers there are   not professionally supervised like what obtains in the traditional media.

The Chairman said the traditional media is  still the best to be patronised in terms of accuracy, clarity, conciseness, coherence and truth.

Adetula also disclosed that The Hope Newspaper remains the best community newspaper in the state.

” We cover the community better than any newspaper. The immediate catchment areas are given priority, the newspaper caters  for them”, .he said.

Earlier, the Editor of The Hope, Mr Akin Adubuola, while  lecturing  the students on the technical aspect  of the newspaper told them about the various processes involved in  publishing a newspaper starting from the newsroom  to  printing.

He said the beauty of a newspaper is how best they can design their pages, therefore all hands must be on deck to ensure that subsequent   production comes out better than the previous ones.

The students were later taken round the company’s  premises to know the nitty-gritty of how to produce a  newspaper.

Teachers’ rewards on earth or in heaven?