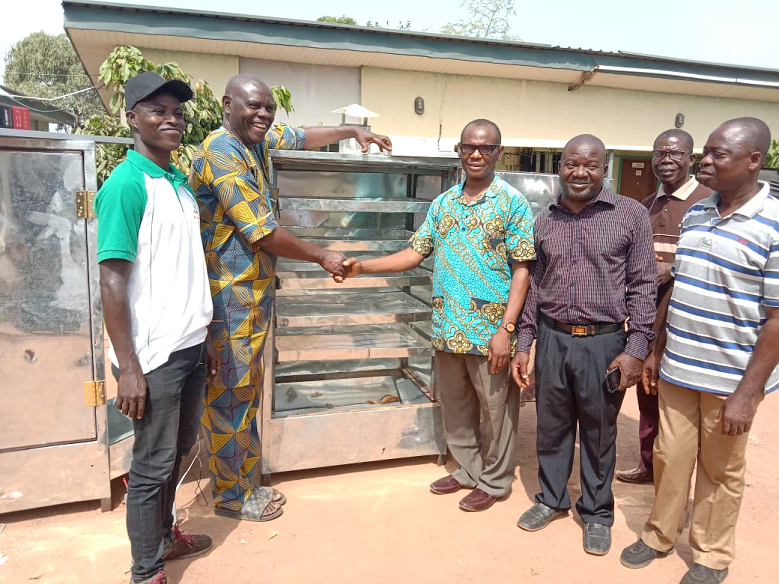 In a bid to address post harvest losses of agricultural farm produce, the Federal Government has presented Solar Vegetable Dryers to farmers in Ondo state.

Making the presentation at the Federal Ministry of Agriculture and Rural Development, FMARD Annex in Akure, the State Coordinator, Mr. Tony Otuonye said it will also help in boosting farmers revenue generation to improve the livelihood of farmers and create employment.

He said the system is not direct-sun drying, but through a solar with special drying devices equipment so that no harmful radiation from the sun which may tamper the chemical components of food.

” The essence is to avoid hot temperature because there is a temperature gauge to tell you the temperature at which it is drying,” he said.

According to him, the produce remains fresh and undecomposed because the nutrients like the flavour, aroma and other qualities are still intact.

He observed that farmers face the problem of storage which increases a lot of post harvest losses thereby frustrating a lot of farmers out of farming.

While noting that the equipment will enhance farmers value addition capability, Otuonye stated that farmers could store their produce against off season when they will sell to make more money.

Oyebade Kehinde of FMARD who sensitized the beneficiaries on the use of the vegetable dryer, said it was designed using air convention technology through the solar panel and some other components that create air convention for drying.

Kehinde said it is water proved design and can be installed and run without error and has to be exposed to sunlight to work effectively.

He urged beneficiaries to take care of it by proper maintenance which involves cleaning and to improve productivity from it.

biodun Olajire applauded the federal government for the kind gesture which they said is an encouragement to boost their morals on farming.

Oguniyi noted that the equipment is a principle and method which will prevent Cancer because there is no heat radiation from direct sun.

Abiodun Olajide affirmed that the equipment will be of numerous value to the college as he assured on effective use of the equipment.

Dislodge herders from Ala Reserves, OSACA cries out