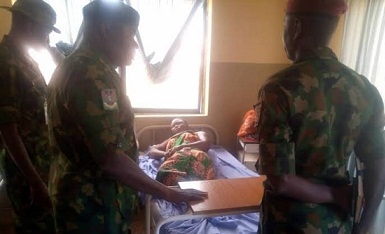 From Fisayo Akinduro, Osogbo
|
A soldier, identified as Blessed Olodi, from the Engineer Construction Regiment (ECR) military base in Ede, has allegedly killed his colleague and one other person.

The soldier was said to have stabbed his colleague and a woman, identified as Mrs Iyabo.

It was gathered that the accused allegedly attacked the victim on January 2, 2020, while he beat his wife and four others, including the deceased, a Lance Corporal.

The wounded Lance Corporal was amongst those who tried to disarm Olodi.

It was learnt that the remains of the deceased have been deposited at the morgue of the Obafemi Awolowo University Teaching Hospital.

The other victims, said to be severely injured, are receiving treatment at the intensive care unit of the hospital.

According to eyewitnesses, the soldier was eventually disarmed and detained by a team of soldiers.

It was gathered that the soldier was on a medical leave from the 17 Field Engineer Regiment operating in the North-East.

Olodi was said to have attended a course at the Nigerian Army School of Military Engineers, Makurdi, before returning to Ede.