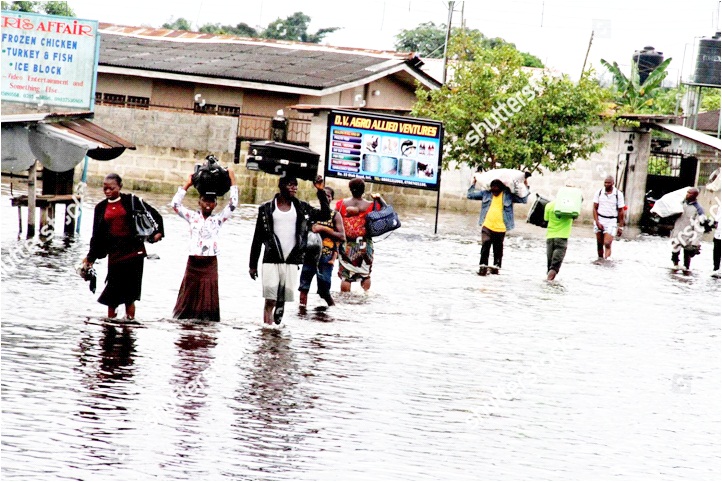 The prediction by the Nigerian Metrological Agency (NiMet) on this year’s flooding that 33 states, including Ondo State, would be affected is already coming to pass, as some victims are lamenting the impact of the flood.
Despite the efforts of Ondo State government to sensitize residents on the imminent flood and steps to stay safe, findings by The Hope revealed that not many people heeded the warning, with the reported cases of some residents swept away by the flood, fences of some houses collapsing, bridges being washed away, crops destroyed and many roads becoming impassable.
The death of two commercial motorcyclists swept away by flood in Ondo West Local Government was reported weeks ago. Aside this was another report that some towns in Akoko area of the state were ravaged by flood, as a result of torrential downpour in the area. Akure, the state capital, is equally affected by flood, as residents of Ijoka, Oda and Oke-Aro also lament the devastating effects of the flood on their property.
Most affected were the river-rine area, especially Ayetoro, a community in Ilaje Local Government area of the State, where 200 residents have been displaced, while over 100 houses have been washed away by sea incursion which reportedly claimed 75 percent of the community’s land mass.
Also, Aponmu community, one of the ancient communities in Akure South Local Government area, is threatened by incessant flood. This year’s torrential downpour has caused flooding in the community, leading to the collapse of houses and erosion of farm lands.
One of the community leaders and the Imam of Aponmu, Mallam Mukaila Ashiru, said the ugly situation has caused sorrow in the community, as residents have no where to relocate to after their houses built many decades ago were submerged by flood.
Another community in Akure South, Igisogba, was reported to have been affected following a heavy downpour that destroyed over 40 houses and rendered the residents of the affected houses homeless. Displaced persons revealed that they were accommodated by neighbours while others were lived with family members. Also affected by the rainstorm in the area were churches and shops as well as electricity poles.
The Hope spoke with some residents on steps they to prevent the flood from wrecking more havoc.
A resident of Oke-Aro, Mrs. Tosin Adaramola, whose area was affected by flood, blamed it on poor drainage system. She said: “We discovered that some of the drainages we constructed late last year were blocked by refuse and plastic bottles. What the landlords are doing now is to embark on weekend clearing of drainages, because the rain is here already. They also warned neighbouring communities against dumping of refuse in the rain, which is the major reason why drainages are blocked.”
Sharing a similar sentiment, an Ijoka resident, Mr Idowu Adeyeye, who disclosed that lots of physical damages had been recorded in his area, including destruction of farmlands and houses, called on the state government to be more active in preventing flood, especially in Ijoka where he said it is becoming a yearly occurrence.
On what the state government should do, he said, ”the government should put in place a taskforce that will be saddled with the responsibility of arresting residents dumping refuse in the water ways, to serve as a deterrent to others.
“Also, the number of fatalities and the impact on communities can be reduced if the authorities prepare themselves to forcibly evacuate those who are at imminent risk”.
A Town Planning expert, Mr Foluso Baruwa, explained that Nigerian authorities and ordinary citizens are ill-prepared for flood. He said: “Tackling persistent flooding requires long-term planning. In most cases, the authorities do not make provision to clear drainage system until it is already rainy season.
“There should be public enlightenment at the community level to sensitize the public. Traditional rulers, council chairmen, community and youth leaders should rally round to educate the people in their domains. They should ensure that blocked drainage channels are cleared and the flood warning should not be ignored, to avoid unpleasant consequences.
“Construction of drainage systems, canals, proper waste disposal, avoiding construction on waste water channels and clearing water ways are some of the ways to prevent flood. Those living in flood-prone areas should also relocate, to forestall further loss of lives and property,” he advised.