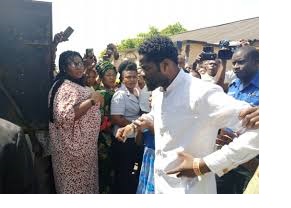 By Kayode Olabanji
|
The founder of the popular Church, Sotitobire Prayer University, in Akure, Prophet Alpha Babatunde, was today remanded  at Olokuta Correctional Service  Centre alongside six workers of his church  by an Akure Chief Magistrate Court,  for allegedly kidnapping a 13-month-old child, Gold Eninlaloluwa Kolawole.
The six workers  remanded  are,;  Omodara Olayinka (f) 50, Margaret Oyebola (f) 62, Grace Ogunjobi (f) 56, Egunjobi Moturayo,  24, and Esther Kayode (f)36.
The defendants were brought before Magistrate, Mrs Charity Adeyanju, on three counts charge of conspiracy, kidnapping and abduction.  But the count three was struck out on grounds of irrelevancy.
According to the charge, the defendants committed the offence on November 10, 2019, at about 11:45am at Sotitobire Praising chapel situated at ,No 48, Solagbade street, Oshinle Quarters, Akure, Ondo State.
The alleged offence was said to be contrary to and punishable under section 516,  of the Criminal Code , Cap 37, Volume 1, Laws of Ondo State,  2006 and 5(i) of the Ondo State Anti-Kidnapping and Anti-abduction Law, 2010.
The state. Prosecuting  counsel, Mr John Dada Joshua, in his motion prayed the court to remand all the defendants at Olokuta Correctional Service centre, pending the legal advice from the state  Director of Public Prosecution(DPP), and also to allow the Department of State Service(DSS), complete their investigations.
Joshua told the court  that one of the defendants, Peter Anjorin, 31, who was earlier granted bail at the DSS  office, is  now at large.
However,  Mr . Olusola Oke, who represented counsel to the  defendants, vehemently opposed  the application for remand sought by the  state counsel.
Oke canvassed that  there was no evidence before the court to remand the defendants, while he  prayed that  all the defendants be granted bail in most liberal terms.
He also urged. the court to grant the first defendant access to his personal doctor for  medical attention due to his health status.
It was gathered in the count that was struck out, that the 7th defendant , who is now at large  had destroyed evidence by secretly taking  away the vital evidence that would have aided speedy investigation in respect of the missing child, Gold Eninlaloluwa Kolawole.
Having carefully gone through  the Counter Affidavit and the case file before the court,  the Magistrate held that the court lacked  jurisdiction to entertain the case, noting that  there was  probable cause  to remand the defendants in prison.
Chief Magistrate  Adeyanju, therefore, ordered the remand all the  defendants  at Olokuta Correctional Service for 21 days, to allow the DSS  go on their investigation.
She directed that  the 1st and the 3rd defendants be given  medical attention, and adjourned the case till January 17, 2020 for the outcome of investigation from the  DSS.