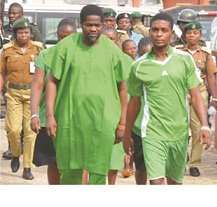 By Sunmola Olowookere
|
Hearing will continue today, in the case of aiding and abetting kidnap instituted against Prophet Alfa Babatunde and some members of his church at the Ondo State High Court.

Despite the stay-at-home directive given by the Federal and State governments following the outbreak of COVID-19, impeccable sources disclosed to The Hope Metro that the case would go on.

It would be recalled that the case was adjourned from March 19, 2020 till today at the High Court.

Two witnesses had been called so far by the prosecution led by the Attorney-General and Commissioner for Justice, Adekola Olawoye SAN.

At the last adjourned date, the mother of the missing boy, Modupe Kolawole gave her testimony before the Court and was cross-examined by all the four defence counsel in a session that lasted for nine hours.

Counsel to Prophet Alfa Babatunde, Olusola Oke, had brought fresh applications before the court at the last sitting. But the trial judge, Justice A.O Odusola reminded him that the case was billed for definite hearing and not hearing applications.

At the last two sittings, the defence counsel had also hinted the court that his client, Babatunde Alfa was not in the best of health as he did not have strength to stand, while he applied to the court that he be allowed to sit down during the trials.