‘Southwest can be self sufficient in tomato production’ 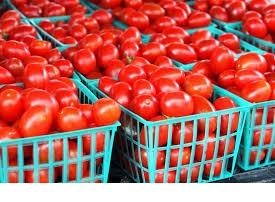 ‘Southwest can be self sufficient in tomato production’

By Kehinde Oluwatuyi
|
Southwestern zone of Nigeria can be self sufficient in tomato production if more farmers embrace its cultivation.

A tomato farmer, Mr Simon Adigun who said this in an interview with The Hope noted that the zone still relies on farmers from the north because it is yet to embrace it.

Adigun affirmed that the land in the zone supports the cultivation of tomato contrary to the opinion that it can not survive in the area.

According to him, tomato cultivation requires skills which must be applied  if farmers will make good profit.

“If the required skills are applied and water is available, here now I have a well to irrigate it, then weed it regularly and  stake it so that the stem does not touch the ground, it will fruit very well”

Adigun added that one can be self reliant if he embraces tomato cultivation which he said takes three months to mature noting that a two hectare tomato farm can sustain a family.

While saying there is no pest infestation in his area, he said there are chemicals to combat it in farms where there are pests.

The farmer who said about three youths now have tomato farms in his area noted that few people who know that tomato cultivation is profitable have joined the train.

He called on more people and youths in particular to consider planting tomato as a business instead of roaming the street, seeking white collar job that is not available.

He also called on government to support farmers by making land available for them adding that many who would have loved to go into agriculture do not have access to land.

Adigun who said that fund is another major problem why people can not go into agriculture appealed to government to make soft loans available for farmers.