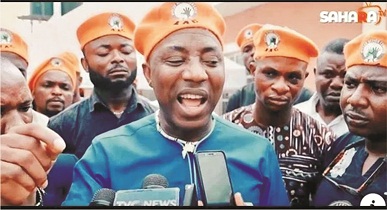 Failing to prepare is preparing to fail”

The seemingly unstoppable and threatening nationwide protest led by Omoyele Sowore of the Global Coalition for Security and Democracy (GCSD) reminds those who could learn from contemporary history of a time honoured  but very pithy cliché credited to the late sage, Chief Obafemi Awolowo that “failing to prepare is preparing to fail”.

To start with, in semantics, the term “revolution” coined generally denotes and always sends jitters, panic, confusion into people’s spines and consciousness.

This is totally uncalled for, premature and inauspicious at this critical point of national travails, security breaches, hideous crimes and the untamed scourges that threaten to swallow our nation like a monstrous reptile.

Omoyele Sowore, an active participant and indeed a presidential candidate cleared by the Independent National Electoral Commission (INEC) in the concluded 2019 presidential polls lost dismally and could not have the temerity and effrontery to call for revolution to unseat the ruling political party that trounced him in the general election. More so, the second runner-up is currently challenging the outcome of the presidential election at the election tribunal sitting at the Abuja FCT.

To have rashly abandoned one’s calling as a responsible presidential candidate sworn to abide with the electoral and extent laws of the land and paripasu resort, in a manner and conduct suggestive to force of arms tantamount to guerrilla warfare at this material time smacks of hypocrisy, confusion, frustration and pathological failure of Sowore to fight for the presidency via the ballot box.

Ballot box remains the only inviolable political instrument recognized by the civilized clime by which one can assume mantle of political leadership and governance in any democracy now firmly rooted and in place in Nigeria.

It shows crystal clear that the present crop or generation of politicians gallivanting all over the place as “new breed” are bunch of indolent and lazy cowards bereft of patience, resilience, industry, tenacity of purpose and indefatigable spirit to soldier on, in the face of insuperable but not insurmountable odds and difficulties before victory can be won on the political arena.

Any revolution or process designated and galvanized towards fundamental change in government or political constitution of a country can be well planned and classically implemented with precision and exactitude if the end must justify the means.

However, revolution can be a free for all; a change more likely generated by the few than by the many which can be stoutly resisted and crushed by the superior military might of government.

The one that readily comes to mind is the aborted revolution or  coup of Major Gideon Orkah to oust the erstwhile self styled military president and “benevolent” dictator General Ibrahim Badamosi Babangida in 1991. The grouse of Orkah and his co-revolutionaries was to excise part of Northern fringe of the country and ultimately re-design the political map and configuration of Nigeria for effective administration and government. The revolution ended in fiasco leaving the modus operandi of the blue print for the proposed new Nigeria forever in the womb of the coup planners or young military revolutionaries whose tall dream perished with them.

It is pertinent to examine the meaning and import of revolution on society vis-à-vis of exacting any impact and effect on the course of purposeful governance and democracy in Nigeria.

According to Chamber 21st century dictionary, revolution is further defined as the overthrow or rejection of government or political system by the governed, often but not necessarily involving violence. For instance, Karl Marx (1818-1883) the German economist, thinker and philosopher whose doctrine named after him “Marxism:, the class struggled ending with the working class taking control of means of production and becoming the ruling class.

“The transition from one system of production to another, the political changes brought about as a result of this which in the ultimate with the establishment of communism in Western Europe.

It should be noted that Revolution of 1948 sparked a chain of uprisings against the established authority on several European states. Although all were ultimately crushed, their impact on political development was unique and profound.

The massive and passive resistance in India before independence in 1947 was against imperial rule. The aim was independence and rule by Indians. Mahatma Ghandi, a thinkers and abstentious and ascetic public figure maintained close links with his own country. He led the tenacious and courageous struggle of the Indians in Southern Africa against racial discrimination. He was a legal practitioner and  Barrister-at-Law in South Africa.

The most important features of Ghandism, its close link with the peasant traditions of Indian society, the welfare and well-being of all and thirdly the method of achieving this ideal struggle.

Dr Kwame Nkrumah was one of the leading figure of the anti-colonial movement in Africa in the 1940s-1960s. Nkrumah took his literary works with redoubled energy and critically examined the history and outline the  perspectives of the African revolution. His political party, the Convention People’s Party (CPP) staged “positive action” in 1950 and in consequence, he was imprisoned for inciting strikes against colonial administration.

Among the books he  authored include “Hand book of Revolutionary warfare and “Class struggle of Africa. Kwame Nkrumah never trod path of violence but relentlessly and vigorously on campaign of civil disobedience and non violence which finally put, paid  to British rule; ushered in independence and home rule for Gold Coast renamed at independence as Republic of Gbana in March 1957.

Back home in Nigeria, even though the striking historical illustration about to mention predated the nationhood of Nigeria that came into being in 1914  by courtesy of the governor of the Northern protectorate, Sir Lord Fredrick Lugard. However, its importance in the quest for national development cannot be over emphasized.

This paper refers to the  19th century Fulani revolution otherwise known as Sokato jihad or Holy War of 1804; destined to change the status quo of Habe or Hausa ruling dynasty for Fulani emirate clamped down on the entire Northern region of the present day Nigeria as far as the Yoruba country of Ilorin wrongly annexed as Fulani emirate.

The hero of the jihad was Shehu Usman Dan Fodio, a Fulani migrated from their homeland  Futa Toro in Upper Senegal, whose family finally settled down in Sokoto.

He was a scholar, teacher and mystic belonging to Islamic brotherhood called Qadiriyya. Shehu over the  years built a considerable following known as Jama’s muslim community.

He spread his teaching through widely distributed pamphlets in Arabic and poems in Hausa/Fulani dialects.

At the age of 40, he received a vision instructing him to “Unsheathe” the sword of truth. He unconsciously launched holy war against the heathens or the infidel and the Islamic revolution, subsequently overran Northern Nigeria and  Yoruba province of Ilorin.

Some facts stand prominently in the course of the historical mental excursion into our recent past of world view. As an illustration, there is always a turning point in the life of a nation where some few personalities, excel in solid personal achievement, put their respective communities or entire nation in world map for recognition.

Ajasin transformed Ondo/Ekiti into El Dorado. With difference, he diligently implemented free education at all levels, free medical services, full and gainful employment and rural integration. He set up Oluwa Glass factory at Igbokoda, Owena Hotel across the state, Owena bank among others. All the legacies are virtually obliterated due to barrenness of minds and sheer ineptitude of some of our practicing politicians around.

Sowore, we reliably gathered is a publisher, Sahara reporters, a global outfit so to say. The guy hails from Ilaje area benighted and backward spot in Ondo State. The state itself only a civil service state lacking basic infrastructure yearning for more development as it remains the most backward state created by military fiat in February 1976.

Yet Sowore could not be advised to start from his root for charity should begin from home. Jesus, our Lord, the true master sums it all; “remove the log in your eyes to see clearly and assist in fanning away the speck in your brother’s eyes”.

The so-called Sowore revolution as events unfold can be described as an after thought venture gestated in sophistry to suborn the gullible and the poverty stricken as canon fodders to cause political mayhem against the ruling All Progressives Congress (APC) government. This could eventually turn out as misadventure or adventure in still birth and a wild goose chase afterall.

Any serious thinking political and human rights activist can start a revolution without firing a shot. Revd Martin Luther King Jnr. An astute human rights activist fought gallantly for the equality of white and black in United States without any force of arms against the government. Ironically he suffered martyrdom.

Ajasin, an old man recorded a feat in government and public administration. He rejigged and revolutionsed good governance in Ondo State.

Mao Tsetung (1893-1976) says: “politics is war without bloodshed while war is politics with bloodshed,” we respectfully commend this immortal saying of chairman Mao to Sowore and his groups to withdraw to their cocoons and restrategise to further deepen the cause of democracy.

Mao Tsetung, a revolutionary of note, charismatic and enigmatic personality in the people’s Republic of China embarked on a great trek alongside the high spirited people in a just struggle to drive home the  essence of purposeful government opposed to the  existing decay and rot of the status quo ante.

Against the backdrop  that the protest or the revolution does not enjoy the fervid acceptance of a cross section of the country, the Director General of the Voice of Nigeria and chieftain of the All Progressives Congress (APC) Osita Okechukwu attributed the poor response in Enugu to igbo quest for president in 2023.

The National Chairman of All Progressives Congress (APC) Comrade Adams Oshiomhole who led several protests as former president of Nigeria Labour Congress (NLC) said emphatically he  would not support  or back any call for revolution at this juncture of the nations democracy.

Hear him: “What was the reason for the protest? Let’s be  honest. I have led series  of protest even to this Aso Villa. Whoever wants to protest should articulate the particulars of his grievances and make specific demands about solution that he wants.