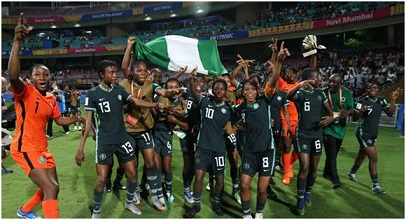 Spain takes the lead after Laia Martret’s shot deflected Ana Guzman who scored in her own goal.

Meanwhile  the Flamingos ensured that they did not leave India empty-handed as they secured a bronze medal at the expense of Germany.

The Nigeria side was supposed to have claimed the straight win in duration time but surrendered a 3-0 lead and allowed the European champions to level up in the 90th minute.

Opeyemi Ajakaiye opened the scoring for Nigeria in the 20th minute and ensured that Flamingoes finished the half with a comfortable 1-0 lead.

Aminat Bello doubled Nigeria’s lead in the 48th minute before Etim Edidong made it 3-0 for the African in the 63rd minute.

The Germans began their comeback 10 minutes later through Tella Viet, and two quick goals from Platinier Paulina and Loreen Bender made it 3-3.

The game was decided via penalty shoot-out where Flamingoes finally emerged 3-2 victorious and claimed the bronze medal.