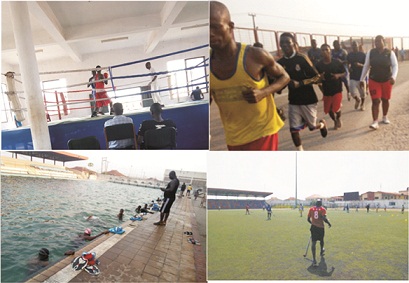 During an unscheduled visit to the training camp, Sporting Hope met the athletes in their respective camps busy doing what they know how best to do .

The first port of call was the swimming section, the head coach of swimming, Digha Baraghawei said , his guys were fully ready to do the state proud at the forthcoming festival. That is why you see the camp bubbling and  guys are in high spirit. Though It’s been long they went for  competition last, their spirit is high, they are ready to make something for the State and for themselves .”

We train twice in a day , morning and evening that is how we will be training till we leave for Abuja”, he said.

On his own, Table Tennis coach, Mr Omoniyi Adedotun, said the camp is going on well, adding that his players are showing flashes of success.

“Although we are still expecting some training equipment, despite that we are still managing what we have so far for the success of the National Sports Festival to bring glory back to Ondo state”.

“The equipment has been paid for, it will arrive before we leave for Abuja”.

He appreciated the state Governor for approving money for the Festival.

“With God on our side , my boys will do their best by winning medals for the state”.

The story was the same in the camp of both Hockey and Sprint the coaches, Mr Mark Oloruntole and Mr Ilesanmi Stephen respectively, said the camp is lively as their teams are ready to haul medals for for the state.

The sprint coach said he is going to Abuja with sixteen able athletes and four for special sport, saying with the crops of athletes in the camp we are taking to the competition ,we are up to the task .”

“With the enthusiasm in the camp , by God’s grace nothing will disturb us from not doing well in the competition “, he said.

Mr Oloruntele said all his players are from the state, saying no mercenaries in his team, they are from Adekunle Ajashin University Akungba, Federal University of Technology Akure (FUTA) and Adeyemi College of Education Ondo .

It will be recalled that Governor Oluwarotimi Akeredolu, penultimate week at the reception to receive the “Torch of Unity” warned against the use of mercenaries to represent the state in the Festival .