Home News Stakeholders canvass for economic use of waste 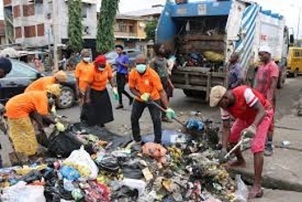 Stakeholders canvass for economic use of waste

By Kemi Olatunde
|
Stakeholders in the management of waste have been called upon to support government in ensuring that waste generated in the state is effectively used for economic purpose.

This can only become a reality if stakeholders perform their duties with utmost professionalism.

According to her, there are lots of economic implications of waste noting that processed waste can produce energy which can be used for power supply and even fertilizer for agriculture.

Describing waste as an input to economic activity through material or energy recovery, she noted that all over the world, waste is fast becoming wealth and the state isn’t an exception as it has since embrace the effective collection of waste in every nook and cranny of the state.

Commending the people of the state for their compliance in the exercise, she frowned at the attitude of some residents especially some National Union of Road Transport Workers(NURTW) who were seen in large number in their parks engaging in other activities and added that necessary steps will be taken to put an end to such attitude in the state.

Speaking with a public waste supervisor, Bankole Folorunso of ZL Global Alliance who is in charge of waste collection in some parts of Akure, the state capital, expressed displeasure at the people’s attitude of bringing waste to the main road but, Akinyanmi stated that the people are used to it due to the company’s inability to render house to house service to them.

According to her, it is important that waste collectors engage in house to house service in order to reduce the volume of public waste on the main roads in the state.

She decried the rate of waste dumped by residents along the major roads especially after being packed by waste collectors and warned people to desist from the act or face the wrath of the law.

Inspecting the Odokoyi market, the Perm Sec frowned at the dirty environment of the market, noting that sweepers are meant to keep the market clean.

Addressing some residents who brought their waste to the market, Akinyanmi stressed the need for all to embrace cleanliness to prevent the outbreak of diseases.

Speaking with The Hope on why they brought their waste to the market, one of the residents, Toyin Ogunsanya who stays around Oja Oshodi in Akure, explained that they are not being serviced by any waste collector in recent time, hence the need for bringing her two weeks generated waste to the main road.

At Apatapiti/Ilohin street, FUTA area, Akinyanmi stressed the need for students to participate in the monthly sanitation exercise as the whole area was an eyesore.

She decried the rate of illegal dumps found in residents’ compound, bushy and very dirty environment.

She charged them on the need to containerised their waste with the use of appropriate dustbin for effective collection by waste collectors.

However, she adviced that they report waste collectors that don’t render effective service delivery to appropriate authority.

Some of the residents who are students of FUTA who spoke on the condition of anonymity noted that they have always maintained clean environment but for their ongoing examination which has prevented them from keeping their environment clean.

Also speaking, Director, Enforcement and Enlightenment, Rev (Mrs) Ayo Adeyemo who revealed that 25 residents were charged to court for not taking part in the exercise, stressed the need for all to give priority to the issue of environment by sustaining it through proper cleaning and added that they should not litter the streets with waste.