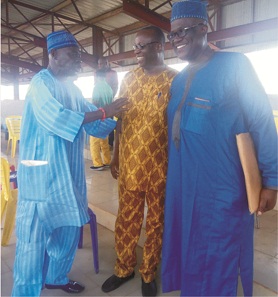 By Femi Atolagbe
|
Peace appears in sight for Ondo State Football Association (FA)as two warring factions   agreed with the Stakeholders Peace committee to meet with Board members today to finally put an end to the crisis bedeviling  state FA over the years.

Former Chairman of the Association in the state, Mr Dele Ogungbemi, who spoke on behalf of the stakeholders told newsmen after the second day of the reconciliation meeting at the Ondo state sports complex in Akure, said the committee is at the verge of achieving total reconciliation.

Recalled that the Sporting Hope had earlier reported how the crisis rocking the state football association prevented them from conducting the earlier scheduled June 6, elections through the petition written by unnamed six  board members of the associations in the state.

According to the former FA chairman, the two parties had put the wrangling behind them in the interest of football development in the state .

He said, “our peace committee will meet with the board members by 10am today before their board meeting, thereafter there will be congress to shift the date of elections, both the local and the state board elections.

It’s the Congress that has power to shift the elections date, so that is why the Congress will  be meeting today to reschedule the aborted June 6 ,local council election to Friday June 21 and state board election for Tuesday June 25, 2019″.

He reiterates that both parties are friends ,adding that everything has been resolved, “no more bickering, no problem, no issues and every body is happy with our decision”,he added.

The chairman of the association, Otunba Dele Ajayi while addressing Journalists thanked the football elders for their intervention in making sure peace reign in the football family in the state.

Ajayi said “the elders had talked to two of them, we have listen to their advise, we will meet today and we will call for Congress immediately after the board meeting, if nothing could crops up again I’m ready to abide by the decision of the Congress”.

According to him,I don’t have a group, all of them are my people, they are all my board members, they are all my Congress members , so we don’t have division in Ondo FA, we are one and we are going to unite to move football forward in the state”, he stated.

On his part, Otunba Dele Ologbese, the association’s vice chairman while  expressing  satisfaction in the reconciliation, added that there are still some contentious issues that needed  to  be addressed.

Ologbese,  “listed the  delegates that would vote in the elections, electoral and the  appeal committee to be  the area that needed to be holistically addressed.

“Until that area is well addressed then we will know where we are going to”.

He added that “I’m a man of peace, we have resolved within ourselves that we are going to allow peace to reign in the association. We are not going to stand as a clog to football development in the state.

He added further that “his determination is to make sure that we remove all the encumbrances that will make football suffer unmitigated disaster in the state .

Ologbese insisted that he didn’t have confidence in the electoral and the appeal committee ,so I want them to be reconstituted to give room for peaceful,free ,fair and transparent elections”, he concluded.