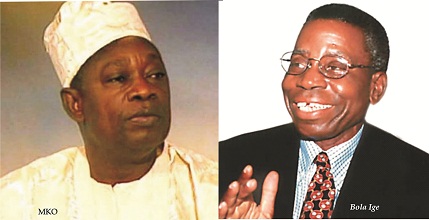 By Ayodele Fagbohun
\
The activities accompanied with pomp and pageantry marking the June 12 as a political process not a personal ambition or issue of Chief MKO Abiola and his family.  But high political water mark in the chequered political history of the country.

All this will be a nullity without paying tribute commensurate to the epic and sacrificial contributions of late Uncle Bola Ige (SAN) the slain Attorney General and Minister of Justice under the ex-president Olusegun Obasanjo in December 23, 2001.

Having loomed large on the political horizon long before the political debacle of June 12, 1993 presidential polls that ever brought MKO Abiola, the presumed winner of the election, to the political limelight.  Chief James Ajibola Idowu Ige popularly called in the political circle as “Uncle Bola” was indisputably referred to as the “Arole Awolowo,” political heir-apparent to succeed the late sage, Chief Obafemi Awolowo.

Uncle Bola Ige was carefully and patiently waiting on the wings to launch his presidential ambition sooner or later under the political platform of the progressives thus taking the country by the storm.

However, Chief Bola Ige tucked away his rising political profile and shelved a well planned and nurtured ambition and the mission to serve.  He unhesitatingly pitched his camp alongside with his revered political associate and leader of National Democratic Coalition (NADECCO), Pa Michael Adekunle Ajasin and other pro-democracy activists at home like Dr. Beko Ransome Kuti.  They all fought like wounded lions and roared for the revalidation of the annulled June 12 1993 election and immediate swearing-in of Chief Moshood Kasimawo Olawale Abiola as the elected president of the country.

Uncle Bola Ige on his own volition and staunch principle of democracy adopted “siddon look” and shunned General Sani Abacha’s military junta; dubbed its five political parties as five fingers of the leprous hand.  This was reminiscent of “satyagraha” Mahatma Gandi’s policy of non violence and passive resistance to the British rule in India.

As an erudite politician and solicitor and Advocate in the Supreme Court of Nigeria, Uncle Bola Ige with his large political following was astute able to distant himself from the apostasy of his counterparts who were already made mince-meats in the hands of the then reigning bloodshot and venal military plutocrats.  He was unbought, unpurchaseable and served as unyielding opposition and bulwark against the treachery of the military demons that eventually triumphed over the oligarchy of General Abacha’s deadly junta.

Chief Bola Ige now belonged eternally to the ages was in the good company of valiant, courageous and versatile men whom the lust of office cannot kill and under whom the whole country would fare better in the comity of world nations if in his lifetime be given chance or elected as president of the nation.

Here was Bola Ige who had served a very long term of political tutelage with unblemished records, loyalty to party supremacy under the feet of immortal Awo, the presumably political avatar of our time, having been proved, tested and confirmed after transition as the best president Nigeria never had.

His unstinted commitment and assiduity as a great politician of vision earned him in 1979 the exalted position of the first executive governor of old Oyo state probably the most volatile and progressive state in the country where he performed most creditably and meritoriously in the service of the people.

His achievements in implementing with fidelity the four cardinal programmes of the defunct Unity Party of Nigeria (UPN) was phenomenal, which echoed throughout the length and breadth of the country.

Chief Bola Ige was probably the only known politician dead or alive much vilified, pilloried unjustifiably persecuted and cowardly thrown into various jail houses across the country for umpteen times for his political belief left wing ideology and strict adherence to naked truth and lofty ideals as panacea to radical changes for justice, equity and fair play in the country.

In the giddy days of Gen. Abacha’s rule when many well considered staunch politicians trembled, fell and crumbled calamitously to the dust, Uncle Bola Ige resolutely identified with the common man on the street with his solo uncompromising “siddon look” stance and waged a grim battle against the obdurate and incorrigible establishment.

He undoubtedly stepped on some powerful toes such that at a stage there was much apprehension and anxiety over his personal safety in the hands of the wicked den of crooks and robbers in government more ruthless and more dastardly than king Herod and Emperor Nero of old.

An eminent statesman of no guile, an attribute Uncle Bola Ige demonstrated empirically during the lawless administration of Gen. Sani Abacha and perhaps the most harrowing and trying period in the nation’s history.  His was a voice of reason and wisdom amid the staccato of giggles of war and drums of secession over the place.

Chief Ige, SAN, played a moderate and sterling role in the political stability of the nation when same was precariously on the fringe of imminent civil strife and extinction.

Let it be remembered that, at that critical moment some people did not know how to place “Uncle Bola” thinking erroneously that the “Cicero of Esa-Oke” had capitulated and betrayed the cause of the oppressed.

He however sincerely and honestly preached loyalty to the sanctity and unity of the polity.  Thus, he attained in a flash the highest hour in his chosen legal profession, Senior Advocate of Nigeria, SAN, an honour usually reserved for the legal minds of distinction whose loyalty to the inviolability of the nation is never in doubt or question.  That was then in the good old days, corruption and political venality has eroded and stained the bar and the bench, a spillover of the social malaise afflicting the entire nation.  A good digression, any way.

Chief Bola Ige bagged the noble prestigious and much coveted laurel in the most turbulent and darkest period foisted on the nation by the irresponsible and insensitive regime of the late Gen. Sani Abacha.

Bola Ige, SAN, had proved beyond doubt that he could successfully manage the country even in crisis if given the opportunity for he was a highly detribalized politician.

“Kaduna Boy,” Bola Ige’s autobiography, born and having his upbringing in Kaduna where his father was a staff in the Nigeria Railway Corporation (NRC).  Bola Ige read classics as first degree in the University College, Ibadan.  He was at home with the three major ethnical nationalities in Nigeria as he could speak House, Igbo and Yoruba languages fluently.  A cool headed, calm and collected industrious political tactician and acrobat of no mean order.

Chief Bola Ige was a top notcher of the famous G.34, an array of eminent and distinguished politicians across the country that worked tirelessly and courageously to halt the late military dictator, Gen. Abacha from transmuting himself to a civilian president via his ragtag five political parties described by Uncle bola Ige as five fingers of leprous hand.

He was a convinced federalist and had consistently warned against the dismemberment of the nation as a counterpoise to the bizarre and lunatic demeanour of the power-that-was to infernally push the nation to the brink of disintegration.

With the debut of the Forth Republic, Uncle Bola Ige as a major player packaged the three registered political parties namely the People’s Democratic Party (PDP), All People’s Party (APP), and the Alliance for Democracy (AD).  He was acclaimed to have single handedly written the constitutions of the political parties.

Chief Bola Ige contested and lost to Chief Oluwayemi Falae in the Alliance for Democracy (AD) presidential primary.  He took his defeat with equanimity.  As a political strategist and the dynamo of Yoruba politics, Chief Bola Ige was mandated by his political Party (AD) to lead the presidential campaign of Olu Falae and his running mate, Alhaji Umaru Shinkafi of APP in ajoint AD/APP ticket in Ibadan, South West.

Olu Falae lost the presidency to Obasanjo mainly due to the political intrigues of the military which organised and supervised the predetermined election in fabour of its military constituency.

Bola Ige as a legal icon was billed for an international appointment in the United Nations World Court at Hague.  He was to assume duty early in the New Year 2002 when tragedy struck.  Uncle Bola Ige, the Attorney General and Minister of Justice, on active service was brutally and gruesomely gunned down in his bedroom at Bodija residence, Ibadan by unknown hired assassins.

It was strongly alleged that the murderers that struck late in the evening at Bodija area got their dossiers from the presidency.  The contrary has not yet been proved until now.

Whilst Uncle Bola Ige fell headlong in the midst of the battle, his murderers vanished to the thin air and not apprehended let alone brought to justice.  Having sustained a rude shock, his amiable wife, mama retired Justice Atinuke Ige (OFR)gave up the ghost in a most painful and pathetic situation.

Uncle Bola Ige’s soulmate, Professor Wole Soyinka, the African First Winner of nobel laureate in Literature described Bola Ige as “ecumenical” politician who haboured no angst bile or vitriolic bitterness against no one be his political detractors or associates.  But consistently and boldly vented his spleen against reactionary forces and the ultra conservatism and fought them hard with a view to installing good governance and ideologically oriented progressive conduct of government business across the country.

Bola Ige courted and suffered political martyrdom on the weight of his strong political ideological belief to call off the cant, humbug of political apostasy.

Now that we have compat brand new progressive government in place, President Mohammadu Buhari led All Progressives Congress (APC) must revisit Bola Ige murder saga, acknowledge his uncanny attributes of patriotism, self sacrifice and selflessness to serve; his intrepidity and political bravery in the face of bayonets and sabre rattling of General Sani Abacha’s Gestapo.

The Federal Government (FG) must deem it fit to post humously honour an illustrious hero and icon of our hard won democracy, Chief James Ajibola Idowu Ige aka Uncle Bola Ige with the highest honour of the land, the Grand Commander of Federal Republic (GCFR).  The time is now!