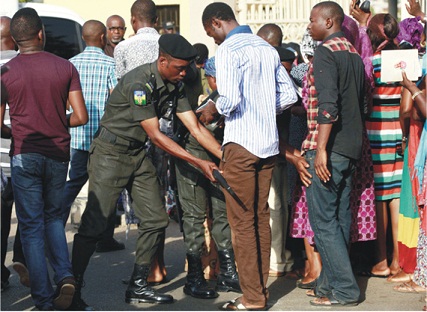 In April last year, a student of the Delta State University (DELSU) got beaten up in Okpe, Delta State, by a sergeant attached to the state police command for owning an expensive phone. In a video that went viral, the policeman could be heard saying that in his 13 years in the police force he had only been able to buy a phone worth N15,000. In anger, he smashed the phone reportedly worth N250,000 on the ground.

An armed group comprising officers of the Nigeria Police Force and the Economic and Financial Crimes Commission (EFCC) harassed Akinyooye Azeez, a Regional Programme Manager at a pharmaceutical company in Ibadan. The officers ambushed Azeez while he drove  in the Olusoji area of Oluyole, Ibadan, after dropping his kid in school around 8 am. The security operatives in a Hummer vehicle overtook him and forced him to stop his car. The heavily armed police officers approached Azeez’s car, yelled that he come down and hand over his phone.

In the recent past, policemen yelled at youths, telling them to hand over their phones, forcing them to come to their stations for retrieval, where extortion takes place. In other cases, youths got beaten up over the ownership of expensive phones, then forcefully manhandled them out of their cars. In other cases, phones of youths get searched, and when policemen see evidence of money in the accounts of youths, they engage in extortion and blackmail, all in efforts to get at the money.

Policemen search phones when they suspect someone is involved in a crime, whether they’ve arrested this person or not, and they will sometimes ask the individual to hand over their electronic devices such as phones, tablets and even laptops. In some cases, police officers will simply take the individual’s phone without their permission and look through it in search of any evidence they can use to incriminate them, said Burton Copeland.

Sometimes, they search phones so they could go through them – reason being youths might be a “Yahoo Boy”, cash cows for them. The police don’t  only stop youths for a random search, but they also go through their emails? It’s a lot like an invasion of privacy, wrote Akindare Okunola in Tech Cabal.

A 2016 NOI Polls survey said 76 per cent of victims of human rights violations in Nigeria did not report them. And knowing they could be easily tracked and identified through banking transfers, some police officers find  accomplices in unscrupulous PoS operators, using them for their illicit activities, knowing they won’t be caught, wrote the Punch in an editorial.

With policemen knowing they won’t be easily caught, on account of victims not reporting them, the practice escalates.    The situation worsens with the increase of young Nigerians such as the so-called “Yahoo Boys”. And with the rise in the use of ICT gadgets, the police end up in  committing  a catalogue of human rights violations and crimes under international law, according to Amnesty International.

In August 2019, four police officers killed two suspected phone thieves, when they could have brought them to justice, according to a report by Channel T.V. In 2021, however, a report claimed that the cases of extra-judicial killing increased to 14 in January, plunged to three in February, rose again to six in March, six in April, nine in May, 12 in June, 23 in July, 14 in August and 77 in September.

In October, 2020,  Nigeria lost more than N700 billion in economic value, with major roads blocked and economic activities brought to a halt, over protests by youths over such practices as checking phones and extortion of money.  Youths attacked two governors, Gboyega Oyetola of Osun State and Kayode Fayemi of Ekiti State, while trying to address #EndSARS protesters. Two jailbreaks took place in Edo State when protesters under the guise of #EndSARS movement forcefully released an unspecified number of prisoners in two of the correctional facilities. Also in Abuja, reports emerged about a car set ablaze at the Apo Area of the FCT. The protests unfortunately claimed a number of lives, while irate youths torched some police stations.

In other words, irate youths eventually react by burning police stations or committing other atrocities when policemen infringe on the their rights through such activities as the checking of phones. Extra-judicial killings escalate, as the Police invade the privacy of citizens, their homes, their telephone conversations. Telegraphic communications are guaranteed and protected by Section 37 of the 1999 Constitution of the Federal Republic of Nigeria, but these get ignored in the course of policemen checking phones of people, said Street Lawyers.com.

Youths should not give their phones to policemen at checkpoints, because if the police were on an investigation, they would present a warrant and then demand for the phone, said Deputy Commissioner of Police Bassey Ewah, warning Nigerians not to give any policeman who stopped them at the checkpoint their phones without a warrant.

“Stop checking phones on the road. You can’t check somebody’s phone. It is his personal property. You cannot do it,” said Force Public Relations Officer, CSP Muyiwa Adejobi to policemen of an activity which Nigerians have repeatedly accused policemen of doing.

Though Nigerians have repeatedly accused policemen of checking their phones, getting them to report the situation every time it happens could prove problematic, in a nation where impunity grows amidst an environment rendered traumatic due to the harsh and debilitating economy.