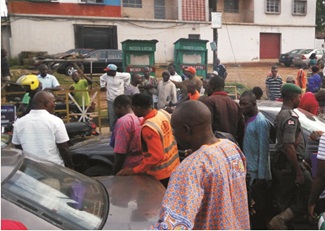 By Michael Ofulue
|
Nigerians have been advised to desist from the act of taking pictures of accident victims and posting same to the social media as such act amounts to disrespect to human dignity.

To this end, members of the public have been encouraged to always cultivate the habit of giving helping hands to victims of auto crash rather than concentrating on taking photographs of wounded persons or deceased victims.

The Ondo State Commander of Federal Road Safety Corps, Mr. Rotimi Adeleye, who spoke with The Hope Metro in an interview, said FRSC will partner with the police to ensure that people coming to have glimpse of victims of auto crash are prevented from taking photographs of the scene.

Adeleye who described the situation as unfortunate, saying people does not care about their brothers and sisters that get involved in an accident any longer, but rather, concentrate in taking photos and uploading such to social media.

He hinted that all the agency is concerned about is to rescue victims and save lives.

He stated, “What is mandatory and concern of FRSC authority is to rescue victims of auto crashes or any unfortunate incident that happened anywhere and not to start chasing those taking pictures.

“I think the only thing we can do is to partner with our sister security agencies, especially the police to help disperse people whose primary aims are to besiege accident scenes with the intention of taking photographs in accident victims.

“It is quite unfortunate that people are not much concerned on helping to save victims of auto crash, but instead, concentrate on taking pictures and fabricating stories far from the truth, while they post same to the social media.

“Sometimesyou will discover that what they post is not what really happened and that gives us a lot of concern.

“We, especially the Nigerian media should help to condemn this evil of taking pictures of scenes of unfortunate incidents, not only accident. It could be any other disaster.

“People should stay away from such areas, because it affects us whenever our men come for rescue operations, since most people are not coming to give a helping hand to victims who need help.

“We do give a lot of advocacy on the evil done at crash scenes. But we are more concerned about saving lives than fighting those taking shots. However, it is very unfortunate.

“We shall continue to enlighten the general public on the implications of such conduct, especially as it affects the family of the victims and the need for respect of dignity of the deceased,” Adeleye stated.

The FRSC boss while appealing to Nigerians to always be their brothers keepers in times of problems, said their assistance, supports and maximum cooperation would go a long way in helping to save victims from death.

He, therefore, called on journalists to always confirm their reports, especially while reporting cases of accident, disasters and other incidences so as to give accurate information and figures to avoid overblowing issues out of proportion just as he said effective synergy to this regard would be highly appreciated