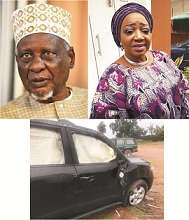 Stop the blame, stop the carnage

By Theo Adebowale
|
The blame game is one evidence that is often displayed to prove that Nigerians are not united.  Apportioning blame is a skill that every Nigerian acquires naturally, early in life.  This attitude may not be unconnected with the popularity of the Adamic version of the story of creation.  Whereas Adam fingered Eve as the agent that made him to take the forbidden fruit, Eve in turn pushed the blame on the serpent.  Many a criminal in Nigeria confesses to the police, or in the court that they were pushed into action by the devil.  These are courageous men and women who confess that the devil is their master and employer. Others who have problems getting a job, or challenge in career may blame polygamy, stepmother or household enemies generally.

One gentleman was brought to jury by his friends on a day he was sober.  They wanted to know why he was so involved with alcohol, why he spent his days away from home.  He told them his wife gave him no peace and was fond of nagging.  Another woman was quoted as saying that she was accused of infidelity because hubby was a failure.  Adeleye Fabu was a bit different.  He narrowly missed being knocked down by a truck in Molete Ibadan.  It was at the intersection where a fly over bridge now stands.  Many passersby flocked round him and were congratulating him for narrowly missing death.  He turned round and blamed them for celebrating with, rather than thrashing him for almost carelessly walking into his death.

That is Nigeria, where a blame must be placed on something or somebody for whatever reason.  Look at rape, rapists and victims.  Boys and men that lack courage to approach members of the opposite sex, those there have been loaded with religious indoctrination to avoid fornication and adultery and those operating under influence of alcohol, narcotics and the rest abuse girls and women.  When caught these criminals blame something, somebody or even the victim.

Religion places the blame on fashion, or even the trousers.  Yoruba pastors in some denominations claim their Bible says the trouser is a male dress.  Some rape victims, unfortunately, crash under the horror of that experience.  But some shake it away and move on with their lives,  many of them becoming great thereafter.  But in recent times, a few get courageous and expose their assailants decades after the incident.  They blame the feeling of low self esteem resulting from recurring memory. What a pity.

Another specie of blame has arisen following assassination of Mrs Funke Olakunori, 58 years old daughter of Pa Reuben Fasoranti, Afenifere Leader.  Fulani herdsmen in broad daylight were said to have opened fire on vehicles traveling on Ore-Lagos Road.  She was felled in the mindless shooting and sympathizers from far and near have been trooping in to condole with the respected statesman.  The Federal Government has come under serious criticism for handling security issues very carelessly, and for being unwilling to address herdsmen attack on the rest of us.  A section of the population has been unhappy that so much publicity is attending the murder because of the status of Chief Reuben Fasoranti.  According to this line of thought, it was an elitist discrimination against the oppressed.  Much as we have established that Nigerians are in the game blame, this one is misplaced and unnecessary.  On the contrary, Nigerians have always united to condemn issues of injustice and official negligence against fellow citizens.  We recall the Bring Back Our Girls campaign driven by prominent Nigerians including Oby Ezekwesili to condemn the security negligence that resulted in captivity of over 200 school girls into Boko Haram captivity.  The campaign has resulted in freedom for many of the girls, and it is still on-going.  Similarly the international community was mobilised to call for rescue of Dapchi girls.  Lea Sharibu that remains in captivity for refusing to renounce christianity continues to enjoy support of Nigerians particularly the press unwavering in call for her rescue.  We confirmed that Nigerians have been fair and prompt in identifying with those passing through difficult times and collective in demand for protection of human rights.  We also believe that there is no tenable reason to abandon any citizen because he or she belongs to the privileged class.  To be sure, Chief Reuben Fasoranti deserves our support and prayers in these trying times.  His political activities and association further qualify him for our condolences.

As for the herdsmen, they have a responsibility to make a distinction between those of them that are law abiding Nigerian citizens strictly in lawful business, and the intruders from Mali, Senegal, Sudan, Niger and wherever who believe their tran-Saharan-cattle-route is to submerge Nigeria and displace citizens from motherland.  A distinction should be made between legitimate trade, and land occupation.  Patriotic citizens would do themselves much good by purging themselves of attitudes and attributes that alienate, and those that expand the sphere of friendship and peace.  Science and technology have made life, including economic business more pleasurable, more productive, more profitable.  The nature of contemporary world also prefers that men must employ acceptable practices in pursuit of occupation, religion or habitation.  The blame game or empty threats would not persuade the modern society to concede to barbaric practices in pursuit of obnoxious ambitions.

The Federal Government appears to be foot dragging in finding solution to terrorist act of Fulani herdsmen.  The more time it yields to procrastination, the more legitimacy of government is swept away.  Government should not only rise up to its responsibility to ensure safety and security of lives and property of citizens, it must hunt down the mindless murderers and bring them to book.

In this season of deaths, government should rise to the occasion and be found to be doing its utmost in prevention of lawlessness.

Our condolences go to Pa Reuben Fasoranti’s family, and other victims of these murderous acts.  We pray God grant our government wisdom and courage to stop the carnage.