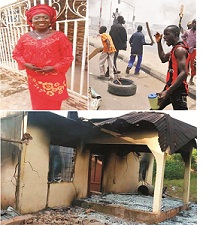 By Theo Adebowale
|
As we grew up we got to know that life is the most precious thing there is. The individual is admonished that health is wealth and as such should cultivate habits that would promote his or her well being. One learns that vigilance is of essence to ensure harm is kept at a safe distance. Before going to bed, one is counseled to switch on security lights and firmly lock his doors, to ensure security of life and property. A lot of people still observe this routine but it is doubtful if lives and property are in any way secure.

Two and a half weeks ago, woman leader of Peoples Democratic Party was murdered in Kogi having drenched her in Premium Motor Spirit. It is hoped that politicians were responsible for the murder and the police would bring them to book.

We are left in our wildest imagination to figure out what her offences were and how the assailants came to the conclusion that she should be burnt till there is no breath left in her! And so it was. The operation was carried out in broad daylight to serve as deterrent to others who might still want to pursue independent political opinion and preferences.

When Mr. President ordered that those criminals be fished out and brought to justice, there was relief with the hope that the miscreants would be brought to book. One expects the arrest to have been followed by prosecution. It is not a case to delay because of the serious damage it has brought upon the reputation of the security agencies. One can only imagine the kind of bravado it would have encouraged in the various hideouts of criminals and their joints. It was assassination of Mrs Sambo but much more it is the death of the Nigerian politician who would have shown much more care to protection of fellow politicians and have risen to repulse the barbaric tendency. It is already an indictment of a Federal Government, a state government who have the authority and resources of the Nigerian state to prevent crimes and bring criminals to justice.

It is such a serious indictment of the security architecture that anybody could be adopted anywhere, anytime and only on prompt payment of ransom can captives regain freedom. High Court judges have been abducted and released. Many professors have been kidnapped, some released after ransom payment and others wasted. It will not be out of place to ask those in government: what did we do to deserve this? Nigerian politicians have become so sedentary now that the only assignment they take most serious is election and reelection.

Uso, Ondo State yesterday was thrown into pandemonium as a policeman was accused as felling a tanker driver at close range for not playing ball, by underpaying him. Since the Nigerian police stopped fueling or giving any form of impress to its officials, it has lost any moral authority on its personnel who collect the toll on motorists without fear or favour. Long queues of vehicles are found on the high way throughout the states of the Federation to collect toll. It may be because some motorists are becoming unruly that public execution of recalcitrants must have been added to serve as a deterrent. Or how else can we justify, explain, or narrate the story of a policeman kitted with public funds but using his weapon to terminate the life of a citizen going about his daily bread? That men of the Nigeria police embark on extra-judicial killing of suspects is not news but that they now resort to public execution of those who refused to promptly pay them for using the highway is calling for urgent attention of members of the public to show sovereignty belongs to them in the final analysis.

It is more apprehensive, and deserves the attention of the citizen because there seems to be a comprehensive policy of those that have no patience for the way the society runs to subjugate the ‘docile’ majority to their whims and caprice. Those that can open the public treasury when they wish, also want to empty pockets of individuals to dispossess them of their property and even take from them fares collected in their commercial vehicle vaults. As we grow old, we observe that times have changed and roles have been perverted. Politicians who ordinarily should propose and made policies for good governance now can be figured in sabotaging the state and cutting lives short. The policeman who brought relief to those ambushed by criminals now employs his weapons to abduct, extort and waste human lives. Government equipped by law to protect individuals and territorial integrity of the state appears overwhelmed by divisive tendencies, corruption, and ignorance.

Truth is that no country held by the jugular by its own elite class has a chance to grow, progress or develop. No amount of chasing the shadow can help Nigeria or her economy. Once insecurity of lives and property continues unabated, whatever fabrics still holds Nigeria is seriously undermined. Detention of Sowore and other protesters, curbing freedom of speech with hate speech and capital punishment can only get the situation worse.

It is in the interest of those at the helms of affairs in Nigeria to reverse the current state of insecurity by boldly confronting the menace. Political party membership should not be immunity to crime while the police uniform and weapons should not be regarded any more as absolving criminals from consequence of their actions and inactions. This we must bear in mind considering the various sources of instability and impunity which perpetually project Nigeria as a state without sanity. The dignity of human life cannot be compromised any further without serious consequence. Government and its agencies must come fast to this reckoning. With the borders firmly shut, it should be easier to apprehend and prosecute criminals so the Nigerian state does not end up in implosion.