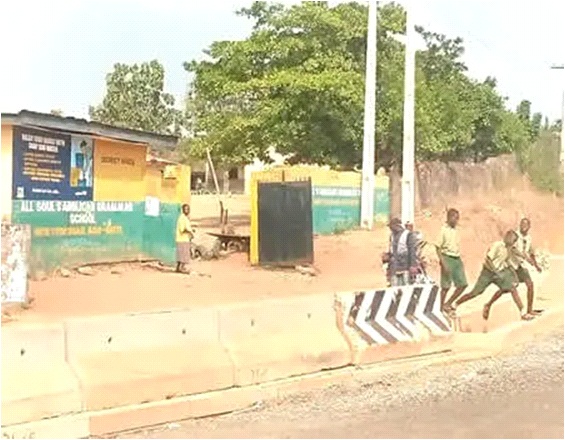 A 19-year-old student, Adeyeni Adejuwon of Oduduwa College, Ile-Ife in Osun State and his thugs have reportedly beaten his principal, Ademola Sanusi to stupor.
The student has been arrested and detained at the police Command headquarters in Osogbo.
The Hope Metro gathered that the student was scolded for not dressing properly in the morning only to return to the school with his father and thugs and unleashed mayhem on the principal.
It was learnt that the 19-year-old student and his gang members subjected the Principal to repeated punching in the school premises.
Osun state police command spokesperson, SP Yemisi Opalola, while confirming the incident said the student stormed the school with his father and a gang of thugs to beat the teacher for scolding him.
She said the principal reported the issue at the police station that he was punched in the face severally by the thugs within the school premises.
“Adejuwon, a Senior Secondary School 3 student and his gang also tore the clothes of the principal while beating him,” she said.
According to her, the student and his father have been arrested, while effort is on to arrest his gang members.
“One Adeyeni Adejuwon, a student at Oduduwa Secondary School, Ile-Ife, Osun was reported to have led his gang to beat Mr Sanusi Ademola, the principal (1) of the school.
“The student, accompanied by his father and some thugs beat the principal for allegedly scolding him over improper dressing.
“The student and the father have been arrested while effort is ongoing to arrest the other thugs,” she said.
Reacting to the incident, the Osun State Commissioner for Education, Folorunso Oladoyin, said the 19-year-old culprit and his gangsters would never go unpunished.
While describing students of public schools in Osun as disciplined, cultured and well behaved, Oladoyin said the act was totally condemnable, sickening, disturbing and disheartening that a student of a public secondary school could be involved in such a morally absurd behavioural conduct.
The Commissioner, who expressed gladness that decency and discipline were on a daily basis gaining momentum in all public schools explained that the administration of Governor Gboyega Oyetola will not compromise standards.
Oladoyin stressed that such incidents would not in any form or manner be tolerated henceforth in all Osun public and private schools.
He reiterated the resolve of the state government to make scapegoats of any student caught in any act of indiscipline by being made to face the full wrath of the law.
He counselled students on the need to face their studies squarely, rather than engaging in truancy and hooliganism, appealing to parents and guardians to keep tabs on the activities of their children and wards before and after school hours.