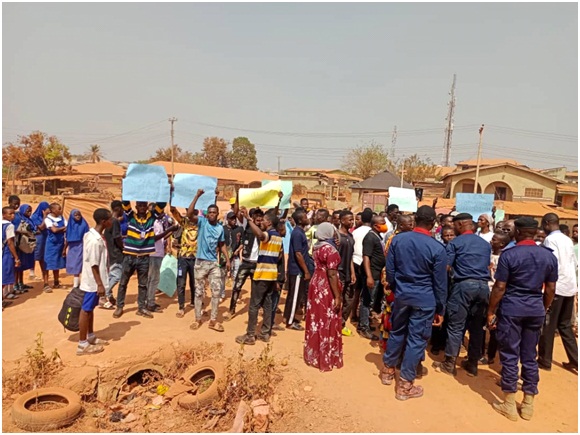 Students in Osun State on Tuesday staged a protest against the alleged abuse of Nigeria Security and Civil Defence Corps, NSCDC for political violence.

The youth and students body described as unacceptable and disturbing the recent conduct of the corps in Osogbo particularly the alleged sporadic gunshots by the officers during a road show by the Minister of Interior, Rauf Aregbesola.

In a letter addressed to the Commander General of the Civil Defence Corps, Dr Hammed Abubkar, by the youth and student organisations, expressed concerns over the recent conduct of the men and officers of the corps as being grossly abused as a political tool in the state which is putting the state at huge security risk.

“It is regrettable that the officers and the men of the Corps that is known for decency, discipline and patriotism has been turned to political tormentors in the state and we have no choice than to cry to your good office before the people of the state began to lose their lives in the hand of NSDC tactical force in Osun ”

”It is understandable that NSCDC is under the supervision and control of Federal Ministry of Interior being superintended by the former Governor, Ogneni Rauf Aregbesola who appears to be running a political battle in Osun but we strongly believe that NSCDC as a security outfit must be completely excused as a willing tools to destabilize the state.

”For your information, we have not had it so terribly in recent time with this level of abuse and the involvement of your officers in political violent has extremely complicated the political tension in the state.

”The dangerous dimension is that most of those personnel has no identity and they always cover their faces which call to question if they are genuine NSCDC officers or clothed political thugs.”

”The Osun Police Command preliminary report confirmed several empty magazines of assorted rifles. This is condemnable and unacceptable to us as stakeholders in Osun project and we cannot continue to fold our arms until the situation is degenerated beyond this level. Hence, we call for the intervention of the National Headquarter of NSCDC to save our soul, ‘ the letter stated.

The youths said they decided to escalate the matter to the Commander General office because information has it that most of the personnel are also drawn from neighboring states.

They insisted that if security apparatus with constitutional responsibility of protecting the people are now at the peak of political violence against the citizens, it calls for a serious concern as a state.

They, however demanded the investigations of NSCDC officers involved in yesterday sporadic shootings in Osogbo and asked that they be punished them in accordance with relevant laws of NSCDC for public disturbance and treat to public peace.

The state commander, State Commander, Emmanuel Ocheja who later addressed the student promised to present the petition to the National Headquarter of the Corps.