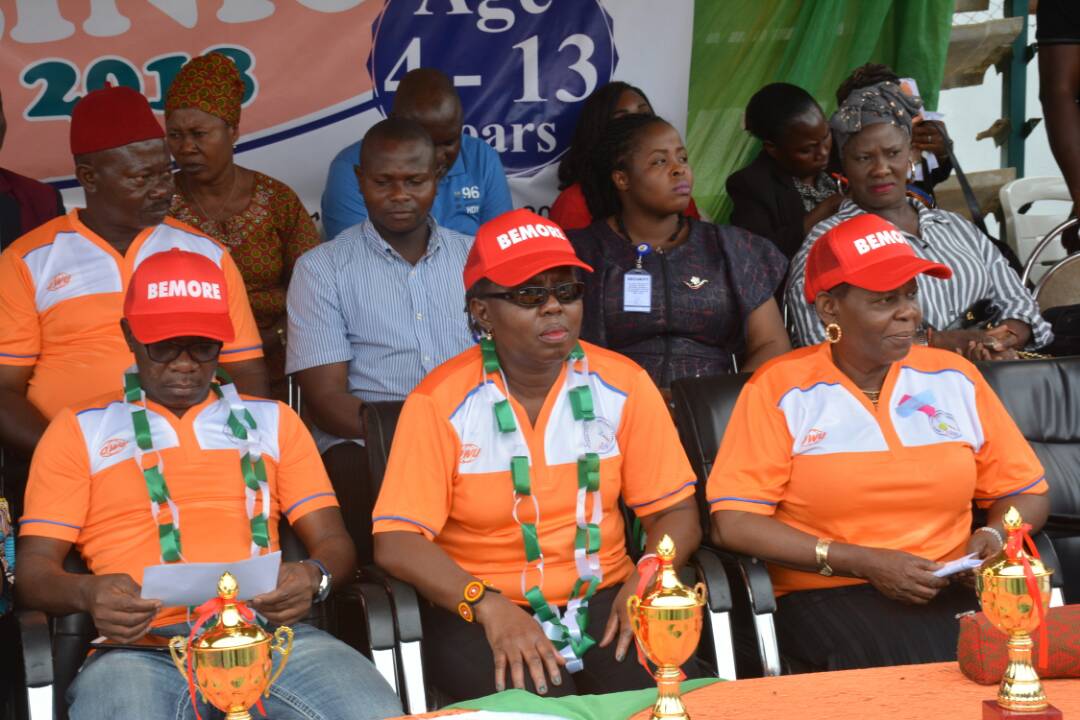 By Maria Famakinwa
|
The wife of Ondo State Governor, Arabinrin Betty Anyanwu – Akeredolu has presented certificates to children who participated in this year’s Summer Tennis Clinic as she revealed that the state can become a tennis hub if everyone contributes his /her own quota to tennis development.

The Wife of the Governor stated this at the closing ceremony of the second edition of Summer Tennis Clinic which took place at the State Sports Complex in Akure. It would be recalled that children of  ages 4-13 have been undergoing free training for the past two weeks on how to play lawn tennis game as many of them took turn to displayed their talents to the admiration of their parents.

While appreciating those who supported the event in cash and kind, the First Lady disclosed that the programme was not sponsored by the government. “I have always said that we should not be expecting the government to shoulder every responsibility because the government has more than enough responsibilities to cater for. Everybody should contribute, no matter how little, that is why the parents and their children are happy today.

“I particularly believed in catching them young because that is when one can discover hidden talents. I want to thank Mr Ifedayo Akindoju from the Nigeria Tennis Federation for presenting rackets and two carton of balls to the State to help in the training of the kids and to the development of tennis sport in the State I pray he will continue to excel in the sport. To the participants, you should continue to practice so that you can perfect the game.”

The Chairman of the Occasion, Mr Albert Adetoye who described the Governor’s wife as a blessing to the State due to different programmes. She  embarked upon like Breast Cancer Association of Nigeria (BRECAN), BEMORE Summer Boot Camp, Forums for Wives of Ondo State Officials (FOWOSO) among others which he observed has been improving the lives of people especially women across the State .

He them  appealed to everyone to support her so that she can be encouraged to do more in moving the State forward.

In his address, the Deputy Governor of the State, Hon Agboola Ajayi who thanked Mrs Akeredolu for taking steps at helping the kids to develop interest in tennis sport also described her as a blessing to the State for nurturing the future leaders. “A lot of people might not really understand what you are doing now but, in the nearest future, they will understand better that you are building future “champions for the State. I also thanked the organiser of this epoch event for a great job, God bless you all.”

Dignitaries at the event included Special Adviser to Governor on Rural Infrastructure, Mr Victor Olabimtan, Special Assistant to the Governor on Women Affairs, Mrs Titi Adeyemi, Officials from the State Football Agency among others.